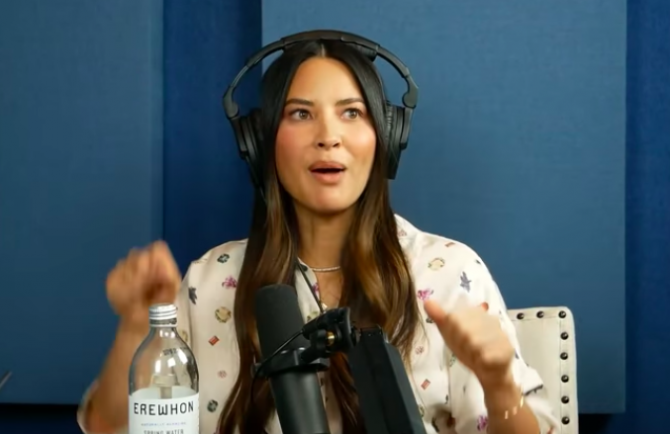 Well, this is disappointing.

“I have this one boyfriend, in particular, that was just the worst, the worst at just having sex,” Munn recalled during the nearly three hour interview.

“He went down on me twice during the years we were together, and I asked him once and said, ‘Why don’t you ever go down? By the way, I don’t want you to. But I’m just wondering why because I feel like most guys I can’t get out of my vagina and I’m like you have to fake it all the time.’”

The actress then implied her ex was gay, saying, “He’s like, ‘Well, I just haven’t had a lot of, you know, experience doing it.’ And I was like, ‘Oh.’ And that’s when I was also like, ‘Um, he may like Benton [Cummings’ male podcast producer] instead,’ you know? It might be his kind of game and stuff.”

Related: This sexy tattoo of Aaron Rodgers in a jockstrap has homophobes freaking out

She went on to explain that her ex, who she did not identify by name, always wanted to have sex with the “lights out” and from behind so “you don’t have to see that it’s a girl.”

“I didn’t put all those pieces together until later,” she reflected. “First of all, I got evidence about something, and then I put the other pieces together. I was like, ‘Oh, that’s what all that [was].’”

By making this insinuation, Munn is employing that tired old trope that if a man isn’t attracted to one woman (read: her), then that must mean he’s not attracted to any women, and, therefore, he’s gay, which is something to criticize him for.

Though she didn’t actually name the ex during the interview, it set off a wave of speculation on social media as to who the man might be.

The actress has dated several A-listers over the years, but her longest and arguably highest profile relationship was with Green Bay Packers quarterback Aaron Rogers, who she dated from 2014 to 2017 and who has been the subject of bogus gay rumors over the years.

Rogers has long said he identifies as heterosexual while at the same time been a vocal supporter of LGBTQ athletes coming out.

The reaction to Munn’s insinuations has been mixed.

Some people are calling her out for engaging in homophobia by further peddling gay rumors about Rogers and, in fact, outing him to the world…

ok but this is a real dick move by Olivia Munn. She’s publicly dragging her ex who was bad at sex and then insinuating it’s because he’s gay??

Are we not going to talk about Olivia Munn outing an ex boyfriend on a podcast?

Olivia Munn could have just said her ex was bad at sex, she didn’t have to out him as gay. She didn’t name names but she’s only had so many several year relationships so it’s not like a secret who her exes are.

Why is no on talking about the fact that Olivia Munn seemingly just outed a very famous ex-boyfriend?? Unless said boyfriend was cheating on her with a dude, doesn’t that seem like maybe not her place to make such a statement and insinuate?

Why did #OliviaMunn have to out one of her exes? She could’ve easily stopped at “the sex was horrible” no need to add their sexual preference ‍♀️ not her place….

Others don’t see what the big deal is…

Nothing about that was remotely homophobic but ok. Rodgers has long rumored to be gay, if true it would be cool for him to come out while still an active player.

Olivia Munn is trashing Aaron Rodgers for never going down on her and only hitting from behind, in the dark. That’s what happens when you date a gay.

I feel kinda weird about Olivia Munn bringing attention to her exes by suggesting one of them was gay but I also feel weird about closeted adult men putting women in situations like that.

@AaronRodgers12 I’m so surprised that in this day and age you’re still scared to be open about your sexuality. So what if you’re gay that doesn’t mean you can’t play football at an elite level. Thanks too @oliviamunn you now have the perfect opportunity to show the world YOU.

Watch the interview below. (Hear Munn’s comments at the 1 hour and 24 minute mark.)

Related: Olivia Munn spills all the tea on Bryan Singer and his very “bad behavior”