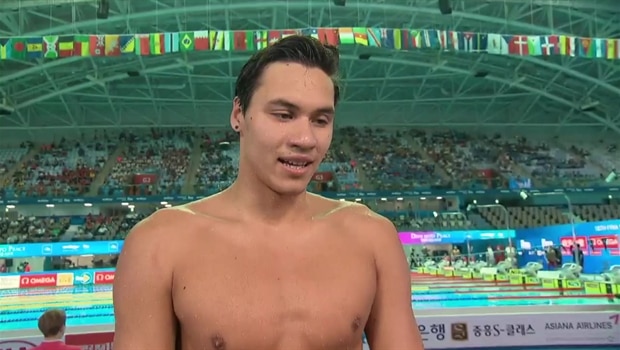 This profile is part two of Queerty’s 2020 Out For Good series, recognizing public figures who’ve had the courage to come out and make a difference in the past year, in celebration of National Coming Out Day on October 11.

Bio: The Vancouver, BC, backstroke star won gold and two bronzes at the Canadian Olympic Trials in 2016, earning him a spot on Canada’s 2016 Summer Olympic team. Thormeyer placed seventh swimming the third leg of the men’s 4 × 100 m freestyle relay and won a bronze medal as part of Canada’s 4x50m mixed freestyle event. He now studies environmental science at the University of British Columbia while training for the 2021 Olympic Games in Tokyo.

Coming Out: Early in 2020, he penned a passionate Outsports essay describing how he came out to his teammates and how it changed their lives and competitive fortunes for the better. “One day, we were all hanging out and the topic of relationships came up in conversation,” Thormyer wrote. “This was my moment. I casually said that I had never been on a date with a guy before and I was kind of scared of it. That I’d probably be a nervous wreck and ruin it.” When his teammates responded no differently had the gender of his date been female and told him he’d be fine, he felt a huge sense of relief. “Knowing that I had such amazing teammates supporting me so strongly regardless of my sexual orientation was one of the best feelings in the world.”