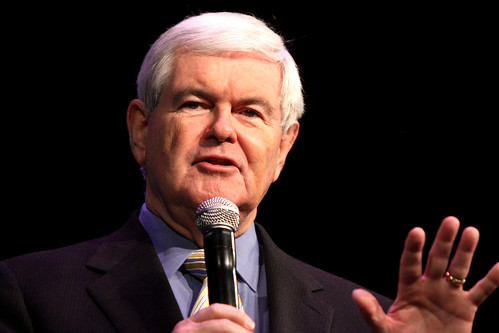 And now Newt. In its frantic rush to find anyone who is not Mitt Romney, the knuckle-dragging fringe of the Republican party has turned to a thrice-married, Tiffany-loving, organizationally impaired former Speaker of the House who resigned after being reprimanded by his peers for ethical violations.

Only in the current alternate universe of the GOP would such a candidate be considered credible. Yet Gingrich is the main beneficiary of  the womanizing Herman Cain’s implosion, despite having a personal history that suggests he could teach a thing or two to the Hermanator about extra-marital affairs.

As you would expect from someone beloved by the Tea Party, Newt tows an appropriately homophobic line. He has been a staunch defender of the Defense of Marriage Act, whose passage he helped oversee, and contributed money to the campaign to remove the Iowa judges who ruled in favor of marriage equality. The family values candidate once took the occasion of his lesbian half-sister’s birthday to affirm his opposition to marriage equality during a national television appearance. He managed to find his way to the television studio for an ideological gab fest but could not manage to call Candace Gingrich to wish her many happy returns.

Of course, there is the thudding irony that the same man who dumped his first wife while she was undergoing cancer treatment and was having an affair with the woman who became his third wife while still married to his second is such a staunch supporter of the sanctity of marriage, but apparently saying you screwed up (and screwed around) is okay with the religious right if you publicly claim you’re sorry.

But even Newt may not be sufficiently pure (if you’ll pardon the expression) for some wingers. He has said that gay marriage is a “temporary aberration” that will go away on its own (tell that to New Yorkers!), an idea that does not endear him to true believers and may cause him some problems in the New Hampshire primary. He’s also suggested that he’s okay with same-sex partners having hospital visitation rights and some other vague legal protections. For religious right followers who long for the return of sodomy laws, this is heresy. Still, Bob Vander Plaats, the king of the religious right in Iowa, is mulling over an endorsement of Gingrich. (It’s a total coincidence that Vander Plaats was the recipient of Gingrich’s donation to unseat the Iowa judges.)

Of course, Gingrich’s real problem is that he is, as his personal life suggests, ridiculously undisciplined. He is so wildly inconsistent in his views that he makes Mitt Romney look like a granite monument instead of well-coiffed Jello. It takes a laser-like focus to run for president, and Gingrich is more of a disco ball randomly scattering light. He is just now assembling the campaign organization needed to turn out the vote in the key early states and lags well behind not just Romney but Ron Paul as well.

Meanwhile, that splashing sound you hear in the background is Democrats salivating at the prospect of going head-to-head with Gingrich. And if Gingrich is the nominee, you have to assume that God is casting his absentee ballot for Obama the family man. The odds still favor Romney, but fact that at some point Bachmann, Perry, Cain and now Gingrich all passed him in the polls underscores the enthusiasm deficit his campaign faces. It’s hard to be a winner if you’re the fifth choice of the party faithful.