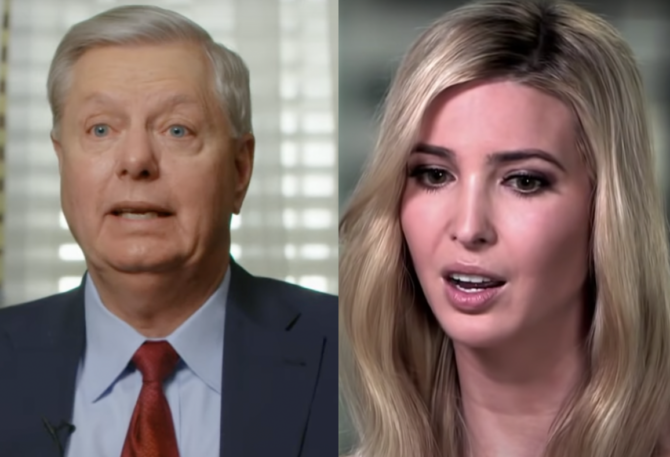 Calls for the former first daughter’s text messages from January 6 to be released are growing louder after the antigay senator let it slip that she was one of the main conduits between Republican lawmakers and ex-president Donald Trump during the deadly insurrection.

Texts handed over to the House panel investigating the Capitol riot by former Trump White House Chief of Staff Mark Meadows before he ceased his cooperation with the committee have revealed that Fox News hosts and Mr Trump’s eldest son Donald Trump Jr texted Mr Meadows on January 6 urging him to get Mr Trump to call off his supporters and tell them to go home.

Mr Graham has said that he didn’t text with Mr Meadows on January 6, but told CNN’s Manu Raju that he spoke with Ivanka Trump and asked her to send a message to her father to “tell his people to leave”.

Sen. Lindsey Graham said he didn’t text with Meadows on Jan. 6 —- but told me he spoke with Ivanka Trump to deliver a message to her dad. He said he wanted then-President Trump to “tell his people to leave.”

Graham’s remarks to Raju come just a few weeks after The Washington Post reported that he repeatedly called Ivanka during the siege with suggestions for what her dad might say to get the insurrectionists to stop trashing the building, shitting in the halls, and hunting for Mike Pence.

“You need to get these people out of here,” he reportedly told her. “This thing is going south. This is not good. You’re going to have to tell these people to stand down. Stand down.”

On Monday, Rick Wilson, co-founder of the Lincoln Project, tweeted, “I want to see what Jared and Ivanka were texting to Meadows.”

I want to see what Jared and Ivanka were texting to Meadows.

So far, the tweet has received over 30,000 likes, nearly 4,000 retweets, and hundreds of comments supporting an investigation into Ivanka’s text records.

Based on what they’ve let slip out now … what’s next to come is going to be lit.

“tell the patriots to staaahhhhhp it, they’re making me look bad,” she said between champagne popsicles

Those phones are all at the bottom of the Potomac, in pieces.

I want all the texts put into a coffee table book.

They were asking how much money they were making over the insurrectionists! What was their hotel occupancy.

Other than “This is really going to screw our chances of getting invited to the Met gala?!?!”

well allegedly she threw a dinner party the next evening and the insurrection was never discussed. Denial is her life coping mechanism.

Not much is known about Ivanka’s actions that day, other than she started watching the insurrection unfold on the TV in her office in the West Wing before moving over to the president’s dining room, where she continued watching it on TV with her dad as they frantically tried to come up with a response.

At 3:15 that afternoon, she tweeted: “American Patriots – any security breach or disrespect to our law enforcement is unacceptable. The violence must stop immediately. Please be peaceful.” She deleted the tweet within minutes, however, after being slammed for addressing the insurrectionists as “patriots.” The next day, she and Jared hosted a lavish multi-course dinner party at their home with several Trump VIPs where absolutely no mention of the previous day’s deadly violence was mentioned.