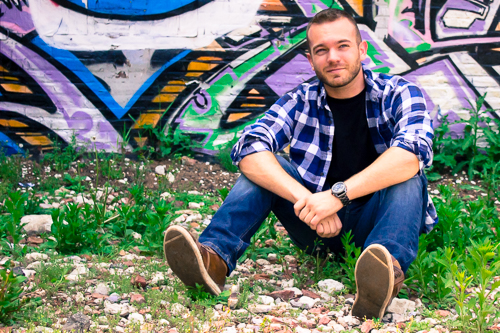 But I’m also a proud cisgender, gay, 28-year-old man living in Philadelphia—keyword, proud. Today, I’m comfortable with my sexuality and live carefree with how others perceive me, but this wasn’t always the case. I look back on 14-year-old Derek, alone and anxious right before he came out. He dared not to tell a soul and obsessed with what people thought of him but while still romanticizing on how he could live out his secret.

So I wrote this letter to encourage my younger self and all the other teenage, 20, 30, 40, 50-somethings who struggle to be honest with themselves and everyone else.

Congratulations. Today, in 2019, you’ve been out now half as long as you’ve been alive. See that mountain you feel you have to climb? I’m on the other side of it in the Promised Land. I should know. I’m you.

First of all, you are not unique. Expand your knowledge. You believe that you are 1 out of 10 who identify as LGBTQ. However, according to a Gallup report, there are 11 million Americans within the LGBTQ community. While that equates to just 3% of the US population, that is still 11 million souls with 11 million different personalities, beliefs, backgrounds, and dreams. Like every living and non-living thing in this world, we are all stardust, made up of the same substances and living under the same sun, on the same rock, experiencing the same motions and emotions of life. So stop thinking that you are unique. However, your story, and, everyone’s story, is.

You cannot see it yet, but you’re on a rainbow path to acceptance—and I know, I know, you don’t like the rainbows. They’re too flashy and an excuse to throw your sexuality in your straight family’s and friends’ faces. Your current motto is cover it up and always sport your “straightness” at all costs. You’re thinking right now, “Exactly. And why do we need a gay parade anyways? Straight people aren’t touting their heterosexualness.” But what you don’t realize is that Pride Month and the parades are to celebrate a movement bigger than your sexuality—a word from the wise, it’s not all about you. I won’t go into much detail but the rainbow flags, shirts, stickers, fill-in-the-blanks, are to celebrate the Stonewall riots and all the progress made for the LGBTQ community since 1969. Take a minute to learn more about the riots and then continue reading this.

You’re an intellectual. Before you tell anyone your secret, you’re obsessing over everyone’s reactions to anytime the topic comes up in conversation. You’re doing your research and getting your hands on as much media and literature as you can to understand how it will impact your relationships, future profession, and self-worth. At this moment, it’s a colossal feat trying to accept it.

You’re still fairly religious at this point—there is a period in your life (circa 2013 to present) in which you question everything, but I hear that’s normal. You have read and reread those Bible verses that only intensify the fear of your eternal fate with every flick of the page. You’ve spoken with a few of the religious gurus in our network, but their ideas are horrific at worst, ambiguous at best. But talk to dad, his outlook on the subject is enlightening.

Note to self: There’s an LGBTQ gay journalist and activist you admire later but should start looking into now. His ideas around homosexuality in the Bible…?

If that doesn’t make you feel better, then only time will.

You’ve looked into conversion therapy and wondered if it works. Dive deeper into that topic though and you’ll discover it doesn’t. Those who claim it, live in abstinent, childless, and loveless relationships. Still, through it all, you cannot will yourself to stop crushing on that guy or refuse to “walk the dog” on the family computer several times, day and night.

You’re worried. How will people perceive you, mom and dad, and the family unit? Mom and dad know us better than you think. Get it out and don’t drag it on. In fact, we don’t. A succession of events will take place the summer before high school, and all will be out in roughly two weeks. You just freaked out and anxiety is creeping in. Ground yourself. There’s nothing to fret. Before the coming out process, you start with small wins. The first time you admit it will be to our dog, Harley. Shortly after, two of our best friends, both of whom are happy for us. Then our sisters—stop worrying about being labeled the “gay uncle,” rather, for your first Pride parade you wear a “Guncle” shirt—and then mom and dad. The day you tell them will be the night you sleep better than you have in a long time. But keep the conversation going. Like our sister said in her letter you’ll soon receive, “Don’t let this be something we don’t talk about.”

You need to pay homage. Coming out impacts those you love. Your fear of your secret affecting the family’s reputation is understandable. You worry about mom and dad’s friendships. Up to this point, we haven’t explicitly talked to them about this, but knowing them, there is nothing stronger than blood. Family comes first. If there are those who do not support the family tribe, then they were not meant to be a part of it in the first place. But you’ll be pleasantly surprised that nothing really changes.

Keep in mind, you are their only son. Every parent dreams about who their child will grow up to be: what career they choose, who they marry, how many children, the whole gamut. Confirm to mom and dad that their dreams are still part of our reality. The only difference is the person you marry is someone else’s son—a trivial alteration in the grandiose of life.

In high school, you will be fine. Kids will find out—you’re in denial that they will, but they do. Again, ground yourself. At first you’ll care, but by sophomore year, it’s old news and you won’t give it a second thought. You’ll have a crush, but this is only the beginning and the best is yet to come.

At the start of college, you find yourself. During the first week, you’re nervous and shy away from telling your roommate and suitemates. However, because of their maturity, it quickly reveals itself. Best of all, no one cares. You soon participate in GSA clubs and sit on a panel to shed light on incoming and current classmen’s questions and concerns. You even go back to your high school and talk about it to the senior class. Be a beacon of light for those who seek it.

Throughout school, you’re in love. I won’t give away much—there are not enough surprises in this world and besides you need to figure this one out on your own—but dating comes natural to you. I will say, the summer before junior year is soul-crushing, but it only lasts for a short couple of months. The fall semester of 2012 is when the real fun begins. Relish in this time as you are also on the brink of sharing life’s next chapter with someone really special. Just keep your head up. I wish I was back in your shoes.

Another side note: Love is wonderful. It’s fun, messy, motivating, emotional, confusing, and heartbreaking, but it’s a wondrous journey. Granted, you’re a hormonal 14, soon-to-be 15-year-old, meaning you have sex on the brain. Sex is great. Live that part up. But don’t rush it. You have your whole life to enjoy it. Just be smart.

But ready for me to rock your world? You are not gay. Gay is a part of you.

There is another tidbit you get from another sister that doesn’t sink in immediately, but it will. While you are gay, you have other gifts to offer this world. Do not let it define you.

Derek does not equal gay. Derek equals the sum of his character traits. Do not boil down who you are to your sexuality. Otherwise, if everyone did that, cities would not rise, the world would not be explored, diseases would never be cured, art would not have meaning, and ideas would never come to fruition. Use your gifts to leave this world in a better place than when you arrived. That’s why I say you are not only gay.

You must use your voice. It is now your innate responsibility to let others know that it’s ok to be unapologetically who they are regardless of their sexual orientation, gender identity, or intimate relationship and that it does, in fact, get better:

Speak out so that heteronormative assumptions and homophobia are obliterated and the notion of ‘coming out’ is obsolete.
Speak out so that people are recognized by their character regardless of who they love or choose to engage in sex.
Speak out to move society away from fear, discrimination, and hate. Speak out so that one day no one will have to.

You will love that you’re gay. You can’t fathom that now, but it transforms from a blemish you deny to a badge you adorn. It’s more than a relief to accept it. It’s a lifelong satisfaction that you are who you are, and there’s no stopping you. Out of all the things anyone could ever take from you, your sense of assured, yet modest self-worth is unwavering. This is why it’s vitally important that through your words and actions, you instill self-confidence in those who struggle to accept their sexuality. You’ve got a light kid, so let others see it.

Today, you volunteer at local LGBTQ nonprofits. You present to your colleagues about the importance of Pride. You speak on podcasts about your story. And you write articles on how employers can improve their LGBTQ inclusion.

What I’m saying is that while you struggle with it now, you won’t for much longer. You accept it, enjoy it, and use it to help others perpetuate the same cycle.

There’s more in store for us that we don’t know yet. It’s going to keep getting better. So tell those who struggle with it that it will also get better for them too. I’ll be on the lookout for letters from our more mature future self.

P.S. For those who are struggling, please contact The Trevor Project or seek out local LGBTQ youth programs. This mountain you fear now will be a molehill you look fondly on later.

Derek Herman is an activist, writer, and proud gay man. Having published works in Forbes, HuffPost, and Thrive Global, he uses his voice to continue the drive for equality. By day, he works in media and communications telling others’ stories and by night, dabbles in acting, telling characters’ stories.

This guy wanted to free himself of sexual shame. So he made a documentary about it.