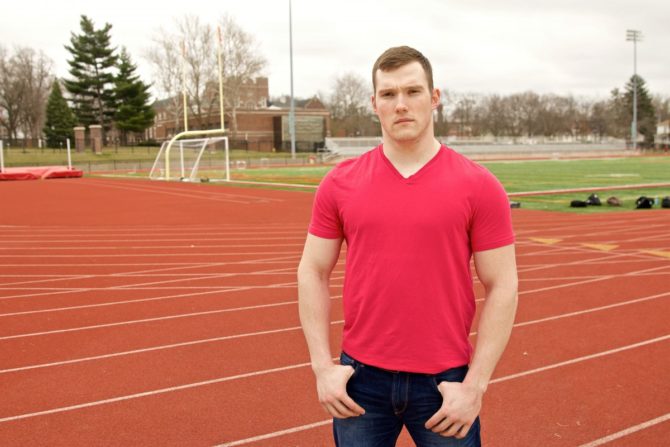 Brenden Moon knew he was attracted to guys since he was in the sixth grade, but he kept his feelings buried for many years.

“I just don’t share deep issues with people,” he tells the Simpsonian, a student-run newspaper at Simpson College in Indianola, Iowa.

In high school, he joined his school’s football team, where he played defensive end, linebacker, and then  running back. As an athlete, Moon explains, he was able to keep his sexual orientation hidden since he was supposed to be “tough” and “a big, strong guy.”

During his senior year, he told three of his teammates about his sexual orientation. Two of the teammates said they never wanted to talk to him again. Meanwhile, the third one began telling everyone else at school.

“It was a disappointment,” Moon says, “It was a friend I thought I could trust. You always want to be the person to tell.”

After graduating, he headed off to college. He saw it as a fresh start. Only this time, rather than being outed by someone else, Moon decided to be up front with people from the get-go.

He joined the school’s football team and came out to some of his teammates. He also came out to his two roommates, who both said it didn’t matter.

Then one day someone wrote the word “Go to hell, f*g” on a whiteboard outside his dorm room. And, just like that, the feelings Moon had experienced in high school once again returned.

“Part of me kind of felt outcast because of what happened,” he says.

Moon sunk into a depression. Then one day out of the blue he received a text message from his teammate, Andrew. It said, “Hey, can you come over to the fraternity?”

The teammate was a brother at Alpha Tau Omega. Moon would often hang out at the house, so he figured he had left something there that his friend wanted to return to him.

When he arrived at the house, Andrew handed him an envelope. Inside was a bid to join Alpha Tau Omega. A wave of emotions washed over him.

“That was probably the first time since I was in sixth grade that I cried because I felt accepted but it also gave me a chance to get a fresh start,” Moon explains.

Andrew explained that everyone in the fraternity thought he was a great guy and would make an excellent addition to the house. When Moon asked if they knew he was gay, Andrew replied, “We had a discussion about that. I’m not supposed to tell you, but all 30 guys voted ‘yes’ anyway. They don’t care, because they accept you anyway.”

Four years later, Moon has fully accepted who he is and is preparing to graduate.

In a recent Facebook post, he wrote “I struggled for years trying to figure out why I was different, why my mind doesn’t work the same as other guys… I managed to overcome my anxiety, my fears and depression.”

“It takes a certain strength to come out, and you can’t fully come out until you accept who you are,” Moon tells the Simpsonian. “It’s fun to be gay. I think it is, mostly because I am happy with who I am.”