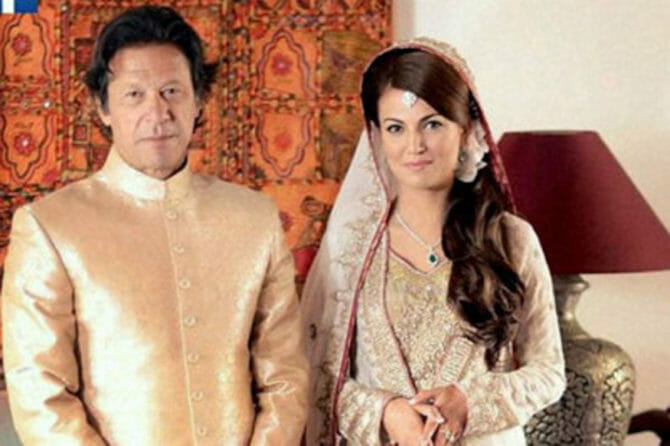 Imran Khan is the current frontrunner in the race for prime minister of Pakistan. But with the election just days away, he may be in trouble… because his ex-wife, journalist Reham Khan, just published a super juicy book about their rocky 10-month marriage and it’s a real doozy.

In the book, Reham claims her ex-husband, who she married (and divorced) in 2015, has had several gay encounters. She points to one friend in particular, a man by the name of Moby, who she says had a “live-in relationship” with Khan, despite the fact that Moby was married to a woman.

“His preferences became clear,” she writes. “My look of horror produced peals of laughter from my sexually liberated husband.”

But his alleged sexual liberation didn’t stop there. Reham also claims 65-year-old Khan also had liaisons with women and that he has at least five children out of wedlock “that he knows of.”

“He would revisit these fantasies, describing his alleged threesomes with the black singer and a famous model-wife of a rock star back in the eighties,” the book states.

Other allegations include: Khan once rubbed black lentils all over his naked body to “ward off a curse” during a black magic ritual; Khan regularly uses cocaine, heroine, ecstasy, and benzodiazepines; and that Khan is addicted to sexting.

In an interview, 45-year-old Reham says she has evidence to support all the claims made in the book.

“I can prove in the court that whatever is written in the book is completely truth and I am saying this with responsibility,” she says.

Pakistan will elect its next prime minister on July 25.