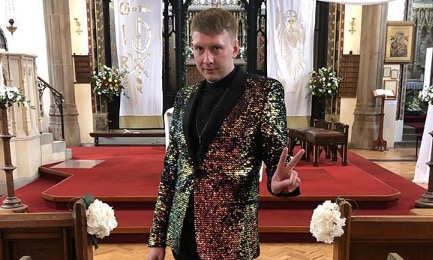 The pansexual Brit, born Joe Lycett, explained on Twitter that he legally changed his name to Hugo Boss to protest the luxury brand sending cease and desist letters to smaller businesses that have the word “boss” in their names. Welsh brewery Boss Brewing, for example, has outlaid nearly £10,000 defending itself against the company Hugo Boss.

Got your dad on my mind

“So @HUGOBOSS (who turnover approx $2.7 billion a year) have sent cease & desist letters to a number of small businesses & charities who use the word ‘BOSS’ or similar, including a small brewery in Swansea costing them thousands in legal fees and rebranding,” the funnyman tweeted on March 1. “It’s clear that @HUGOBOSS HATES people using their name. Unfortunately for them this week I legally changed my name by deed poll and I am now officially known as Hugo Boss. All future statements from me are not from Joe Lycett but from Hugo Boss. Enjoy.”

The 31-year-old has receipts, too: He also tweeted a scan of his change of name deed from the U.K. Deed Poll Office in London.

It's clear that @HUGOBOSS HATES people using their name. Unfortunately for them this week I legally changed my name by deed poll and I am now officially known as Hugo Boss. All future statements from me are not from Joe Lycett but from Hugo Boss. Enjoy. (2/2) pic.twitter.com/IlDoCrfmaO

“It’s not fair. Nobody is going to confuse beer with Hugo Boss,” he said during an appearance on BBC’s Victoria Derbyshire program. “I would like them to stop doing this, stop sending these cease and desist letters, because no one is confusing these two things.”

Related: Pansexual hero came out to homophobic grandma in a true mic-drop moment

The comic formerly known as Joe Lycett, who also hosts BBC Two’s The Great British Sewing Bee, discussed his sexuality in a 2016 i newspaper interview. “I say bisexual because it’s easy for people to understand, but I actually don’t quite think it’s that. Pansexual seems to be the closest thing at this point,” he said. “In the sense that, what I’m attracted to changes depending on intangible things. Sometimes you just look at someone’s thighs and think, ‘Oof, God, yeah,’ but the other parts don’t appeal to you. It’s not entirely to do with gender — it’s to do with where you’re at, your upbringing and the kind of person you are. It’s really complicated, like life is.”