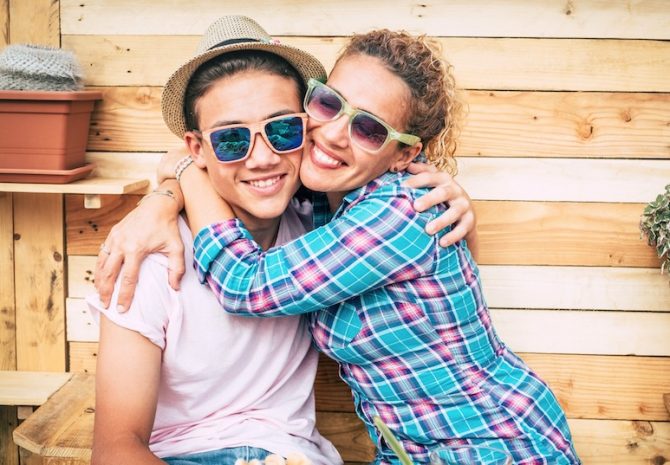 A dedicated mother created a Reddit account just to ask for help saying the right things to her potentially-closeted teen and “support him in his journey.”

“My sweet wonderful son is 14,” she wrote in a February 20 post that’s been 98% upvoted. “I have been 80% sure he is gay since he was very small. Although he hasn’t shown any sexual interests I found a Tumblr account on his phone that was following a very specific fetish. … He is a typical grumpy, private teen. We live in a closed-minded area, and I don’t have any gay friends.”

This mother wrote that she has tried to show her PFLAG candidacy, so to speak: “This is what I’ve done [with] father and stepfather totally on board: I stopped saying, ‘When you find a wife,’ and say, ‘When you fall in love,’ or, ‘When you meet the right person.’ I try to loudly declare my support for LGBTQ movements. I tried to get him to go to our area’s first pride parade with me. He quietly declined. I’ve asked him if there are any gay and lesbian students in his middle school and if they are treated differently. ‘Yes’ and ‘no’ is about all I got.”

He is my life. I just want him to be happy. I screwed up the birds and bees talk a few years ago… idn’t even occur to me to include sexual preferences. I even looked for some books to ‘leave’ laying around about gay teens. Bought a pride shirt, but I’m afraid to wear it around him in case he’s self-conscious. (Sigh.) I brought him to a local theater musical Friday. Xanadu. Trying too hard? Yup. Probably.

“What could your mom have said at 14 that would have made you feel supported and comfortable if anything?” she asked users in the r/askgaybros subreddit. “I know I can’t force him out of the closet… and he may still be straight or bi. I just don’t want him to feel alone or ashamed EVER.”

Commenters were quick to point out she’s off to a great start. “You’re already doing great things,” wrote one. “Honestly, just being there for him, loving him, and letting him know you will always be a safe place for him to go to. A lot of it has to be his journey, but knowing you have his back will be huge!”

Related: Teen says he was outed to his dad by Netflix

Wrote another: “I am sure whenever he finally decides what he truly wants to be and represent as, he will tell you in confidence, knowing you’ve been so supportive. Right now he might just see you as annoying ‘cause hormones.”

A third commenter advised the mother to not confront her son about his sexuality: “You might ‘know,’ but let him tell you instead of trying to pull it out of him. As long as you provide an open environment for him to come out, he will say it when he’s ready.”

And others just gave the mom props for being awesome. “A lot of gay males would cry to have someone like you as their mothers,” another user wrote. “Just accept him for who he is and feel free to judge any BF he brings over harshly, lol.”

The same day she posted her message, the mother followed up to post her gratitude to her fellow Redditors. “I’m glad I can chat with men who have been there,” she wrote. “Brings me to tears. I just don’t want him to ever think there’s something wrong with him. … I’ve gotten some excellent advice as to how I can continue to support him on the sidelines and be a cheerleader for him!”