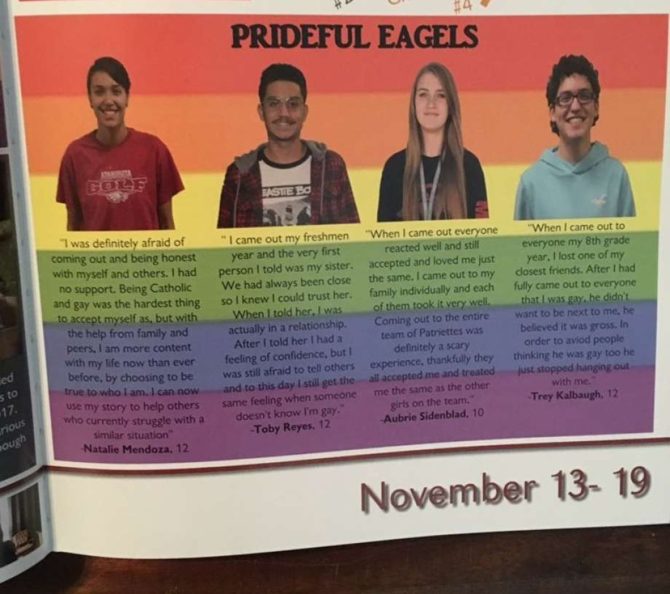 In order to be more inclusive, yearbook editors profiled four queer youngsters, who shared their experiences coming out over a rainbow-hued background.

Now, irate parents have been writing into Atascocita.com to threaten and insult the yearbook’s Editor-in-Chief, recent graduate Kyle Armour.

“People were saying he was dumb, not smart, that I should not be proud of who he is,” said Kyle’s mom, Kimblerly Hicks Armour.

“I’m very proud of who he is. He did take a stand and make something diverse for the community and to our school,” she told the Houston Chronicle.

One user named SteelerNation argued the section was insulting, and that LGBTQ students were “jamming their crap down our throats!”

“We can’t pray in school,” lynnsgirl said, “but now we have a section strictly dedicated to the gay community explaining how, when and why they came ‘out.’ I’m honestly disgusted and embarrassed.”

In light of recent events, I wanted to give people the chance to put a face with on the back end of hurtful comments made against LGBTQ+ pic.twitter.com/LY1pMUEQ9s

Natalie Mendoza is one of the students featured on the yearbook page, and she’s upset by parents’ comments. Users were critical of both her coming out story and her chosen quote: “I can turn your girl.”

Parents also took issue with a student whose quote was “Viva Mexico.”

“Hope they self-deport,” SteelerNation wrote. “That crap does not belong in a USA yearbook.”

someone go grab your parent. pic.twitter.com/KhwFrhpzqW

Students posted their angry rants to Twitter, condemning parents for hiding under a cloak of anonymity to spout their rhetoric.

I am proud of my school and the fact that we are accepting of everyone. I am proud of our diversity and inclusion.

Atascocita high school is trash ? end of story. Let people be who the fuck they TRULY are, if not then burn tf down ?

A spokesperson for Humble Independent School District said the yearbook should have been more “thoroughly vetted prior to publication.”