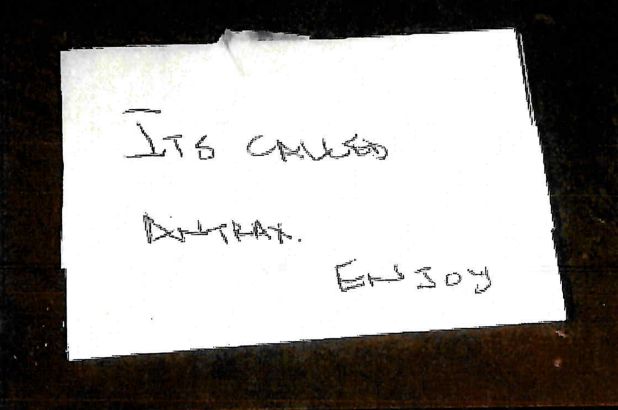 New York City police arrested Ameen Keshavjee this week for allegedly sending fake anthrax and threatening letters to an employee of the popular gay bar Nowhere in Manhattan. The reason: he’d been kicked out of the establishment.

Keshavjee began sending threats last February after an employee told him to stop emailing the bar with crazy notes. He stopped frequenting the establishment but sent the threats to the employee instead.  “After the way you 3 sh*ts repeatedly harassed, bullied and intimidated me YOU LOW LEVEL HUMAN garbage decide that **I** crossed a line????,” he wrote. “DIE OF AIDS, you leftie, hypocrite, democrat-voting FU–S!!!!! I sincerely hope (the employee’s partner) gives it to you, you f–king disgrace to the planet! I will be there to pee on your individual coffins!”

The threats continued each month thereafter, with one in April reading “I would LOVe to attend a funeral featuring you 3 pieces of HUMAN SH*T!!! A. Are u f*cking bullying 3 dead yet? Please reply YES! You in particular, (employee), are a hateful, spiteful, bullying, discriminatory, racist, human sh*t. Get AIDS or cancer and DIE: you (two other employees) leave us quiet people in peace, you human sh*ts. Peace and quiet. A”

Keshavjee waded into more dangerous territory this December, when he sent a note containing white power and the message “It’s called antrax [sic]. Enjoy.” At that point, the bar notified authorities. Sending fake anthrax is considered a federal offense, and the FBI became involved in the case.

“Even though there was no actual anthrax in the note allegedly mailed by Keshavjee, that doesn’t minimize the consequences of the crime,” FBI Assistant Director William F. Sweeney Jr said of the case. “Hoax threats not only intimidate the victims they are intended for, they require extensive law enforcement resources that could be better used elsewhere.  For anyone out there who might be contemplating a hoax of this nature, just remember Keshavjee now faces up to 10 years in prison for his alleged actions.”

If convicted of his crimes, Keshavjee could face up to 10 years in prison.