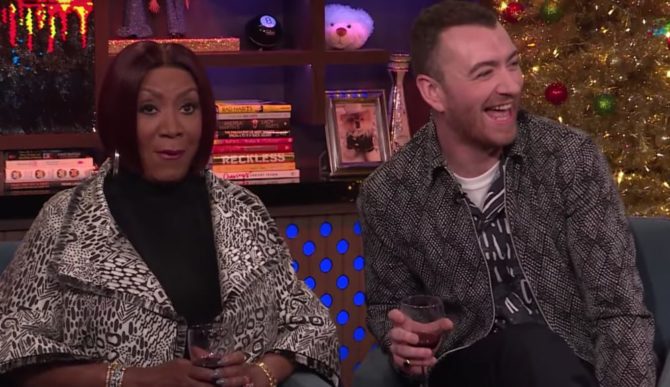 Sam Smith has an impressive six number one singles in the UK. He’s known around the world for his distinct crooning. He has an Oscar!

But there’s one thing you may not know about Sam — he’s a “dick monster.”

You read that correctly.

And if the idea of Sam Smith as a “dick monster” makes you crinkle your nose and go “huh?”, well you are not alone.

In fact, you’re in good company. Patti Labelle doesn’t get it either.

Appearing on Andy Cohen‘s Watch What Happens Live, Smith was asked by a caller what his tagline would be if he was a cast member of Real Housewives. Is this what keeps people up at night?

“I think mine would just be, ‘I’m a dick monster’!” he exclaimed.

Laughter ensued, but fellow guest Patti LaBelle looked notably befuddled. Us too, Patti, us too.

Cohen, ever the hard-hitting journalist, went in for a followup to get an explanation:

“It’s what me and my best friends say. You just, like, hunt for the dick,” Sam said.

Patti let out a tension-breaking “Whooo!”, and the world kept turning.

You’ll also notice at the end of the clip, someone at the sound board played a sample of Patti asking “Where’s my background singers?”

If you aren’t familiar with this pop culture masterpiece, well, Merry F-ing Christmas:

In Emeli Sandé’s version of events, you can find love and success when you come out

In Emeli Sandé’s version of events, you can find love and success when you come out