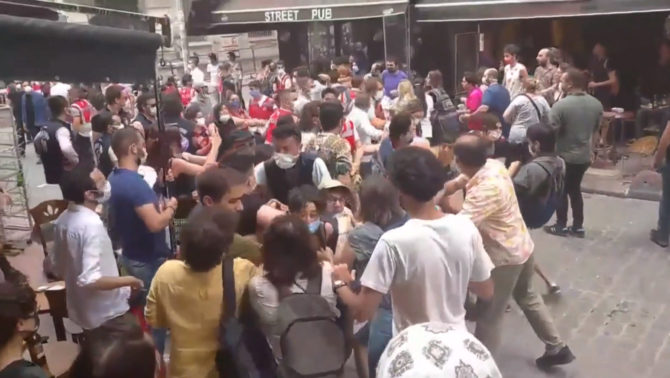 An LGBTQ pride march in Turkey went horribly awry over the weekend when police there began firing rubber bullets and tear gas on the peaceful marchers.

UK magazine Attitude reports that the march happened on Saturday, June 26. Video of the event shows the march dissolving into chaos as police began to fire on the crowd. Website Euronews also reports that police made about 20 arrests during the event.

Homosexuality is legal in Turkey, though the queer community in the nation has become the brunt of much repression under the regime of current President Recep Tayyip Erdoğan. The Governor of Istanbul had refused to authorize the march under the guise of “protection of public peace and security, general health and morality.”

Related: 17 beautiful images from Pride Month around the world

International queer rights advocate Peter Tatchell condemned the actions of the police as an assault on human rights everywhere. “The violent police repression in Istanbul was a homophobic police state in action,” he said in a statement. “The pro-Islamic regime is at war with the LGBT+ community – and also with women, Kurdish people, and the democratic opposition.

Appalling scenes emerging from #Turkey. Despite last-minute banning of @istanbulpride, police brutally attack peaceful #LGBTI+ activists. Our colleague @sariyilmz has taken shelter in a local bar and is currently surrounded by police. pic.twitter.com/glX5FvoiTR

“The international community should respond by halting all aid and arms sales to Turkey,” Tatchell continued. “We need a global campaign of boycott, disinvestment, and sanctions targeted at the ruling elite; including Magnitsky sanctions such as travel bans and asset freezes.”

The chaos at the pride march is just the latest in a series of state-sanctioned anti-LGBTQ incidents in Turkey. Last year, Amnesty International called on the nation to condemn the mounting homophobic remarks by state officials in the country. That same year, schools in the nation banned children from drawing rainbows, claiming doing so would turn them gay.

Amid the COVID-19 pandemic, President Erdoğan also backed a government official who insisted same-sex relationships had brought about the disease.