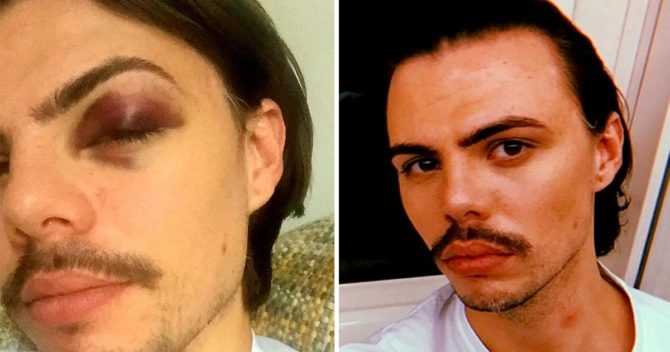 YouTube personality Tom Payne and his roommate Luke Marsh met Sean, an Australian traveler, at noted London nightclub G-A-Y. The three decided to leave the club together and stop off at a Hardies chicken restaurant on their way back to Tom & Luke’s flat. There, they encountered a pair of hostile men.

“It was just the three of us,” Payne (above) told reporters. “You can tell I’m a gay man, and with the three of us it was obvious we weren’t heterosexual alpha males and that made me feel like a target. We ordered food and suddenly we started getting these comment and pretty sure one of them was fa*got.” Payne believes the men were triggered when Sean gave him a kiss on the cheek.

Related: Hours after raping a gay man, the attacker was killed in a shootout with police

The three decided to leave to avoid any trouble. Outside the shop, the two men attacked Sean from behind, punching him in the face knocking him unconscious. Payne and Marsh tried to intervene and got attacked themselves.

“I literally just threw myself in not thinking because I can’t let this guy get beat like that,” Payne recalled. “From doing that I got punched in the face twice and then my housemate he came over to stop them but got chased.”

Police and an ambulance arrived shortly thereafter, taking Sean to the hospital. Doctors treated him for his injuries and discharged him.

Scotland Yard is investigating the crime, but thus far, has made no arrests. The owner of the Hardies stated that though the restaurant has security cameras, they were malfunctioning the night of the incident.