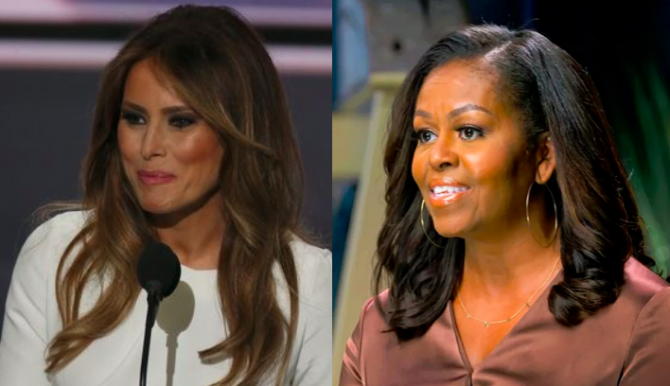 Everyone gave solid speeches, but it was Forever First Lady Michelle Obama’s epic closing remarks that stole the show, and quite possibly the entire convention.

Mrs. Obama spoke for approximately 18 minutes in a pre-taped speech that was widely praised by, well, everyone. Even Trump’s buddy, Fox News anchor Chris Wallace, couldn’t deny that it was an absolute barnburner.

As the nation was once again reminded of what a truly effective speaker Michelle Obama is, they were also reminded of that time Melania Trump plagiarized her at the 2016 Republican National Convention.

As you may recall, Mrs. Trump copied word-for-word several lines from the speech Mrs. Obama delivered at the Democratic National Convention in 2008. And she may have gotten away with it, too, if it weren’t for, you know, people’s memories.

Melania was dragged in the press and on Twitter for plagiarizing the speech. Trump staff writer Meredith McIver later accepted blame for the incident, saying she felt “terrible” and that she never meant to cause any harm. Melania herself never apologized.

After Mrs. Obama’s truly inspiring speech last evening, many on Twitter are now wondering if perhaps we will get an encore performance of the same exact thing next week from Mrs. Trump at the Republican National Convention.

Melania Trump: “That’s what I was going to say.”#MichelleObama

“I am a Black woman speaking at the Democratic National Convention.”

FLOTUS Melania Trump preparing her speech for the RNC pic.twitter.com/qBUcCnlstf

When @FLOTUS delivers #MichelleObama’s speech again next week, will it have the same effect?

@FLOTUS bet you had some ideas after watching michelle give her speech tonight, didn't you? pic.twitter.com/bIKxvKYrJI

Imagine being Melania Trump and having to watch Michelle Obama straight up DELIVER once again, and knowing this time.. you can't steal her speech. ?