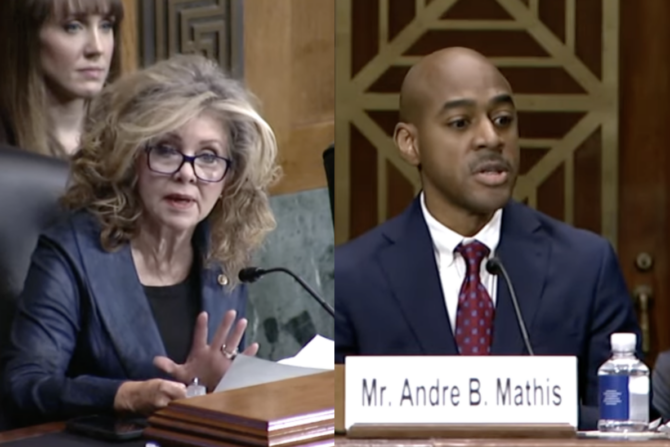 Marsha Blackburn is trending on Twitter for all the wrong reasons. Again.

The senator from Tennessee, who loves God and hates gay people, showed up to work today looking like, well, this…

OK, OK. Criticizing a person’s looks, even when they’re homophobic, is unkind. We apologize. Especially since Blackburn’s hair isn’t even the most outrageous part of this story. It’s what she said about one of President Biden’s judicial nominees during a Senate Judiciary Committee hearing that’s truly offensive.

Blackburn said she opposed the nomination of Andre Mathis, who is Black, to the U.S. Court of Appeals for the 6th Circuit because of his extensive “rap sheet.”

“He has a rap sheet with a laundry list of citations, including multiple failures to appear in court,” she said. “In Tennessee, we expect our judges to respect the law. If Mr. Mathis thought he was above the law before, imagine how he’ll conduct himself if he’s confirmed as a federal judge.”

A rap sheet is a list of someone’s previous arrests and convictions. In Mathis’ case, he doesn’t have any. But he did get three speeding tickets over a decade ago, one of which was for going 5 miles over the speed limit.

This, as seen from Blackburn’s white gaze, disqualifies him from being a judge, even though Mathis paid the tickets and hasn’t gotten another one since.

Speaking before the Senate Judiciary Committee, the nominee said he regretted his decade-old speeding tickets were even being brought up during the hearing.

“I highly regret that I’m in this situation,” he said. “I feel like I’ve embarrassed my family. While I deserve this, they don’t.”

Adding yet another layer of absurdity to the situation is the fact that Blackburn herself was pulled over by Capitol Police just last year and flashed her congressional pin to get out of being ticketed.

After Blackburn’s remarks, Sen. Dick Durbin of Illinois mocked her by saying, “Sen. Blackburn refers to your ‘rap sheet,’ is what she called it. Well, if speeding tickets are a rap sheet, I’ve got one too. … We’ve all, I think, been guilty of that sin and perhaps all have a rap sheet that’s over 6 miles or more.”

Who told Marsha Blackburn that ‘Yard Sale Barbie’ was a good look? pic.twitter.com/2LVs2mgeOi

If Marsha Blackburn is trending, it's never because she did something decent.

So I gather that Marsha Blackburn wants to crucify somebody for speeding while black.

Sen. Marsha Blackburn (Q-Tenn.) thinks a Black judicial nominee’s speeding tickets constitute a “rap sheet”? This senator, with a history of corporate malfeasance, is both a hypocrite and a racist… pic.twitter.com/k8Rc1NNYKB

Marsha Blackburn is walking proof that you can put boatloads of perfume & lipstick on a pig & even elect it to Congress, but at the end of the day… it's still a damn pig.

Is this what happens to @MarshaBlackburn ‘s hair when she removes her hood? https://t.co/g84t4em30f

I thought it was a joke that Marsha Blackburn has a degree in Home Economics but she does.

…could be whiskey, tho pic.twitter.com/VVFAWX1QFk

Don't mind Marsha Blackburn. She's just mad because she doesn't have the energy anymore to compete with Lauren Boebert and MTG, and she has to be crazy in more subtle ways.