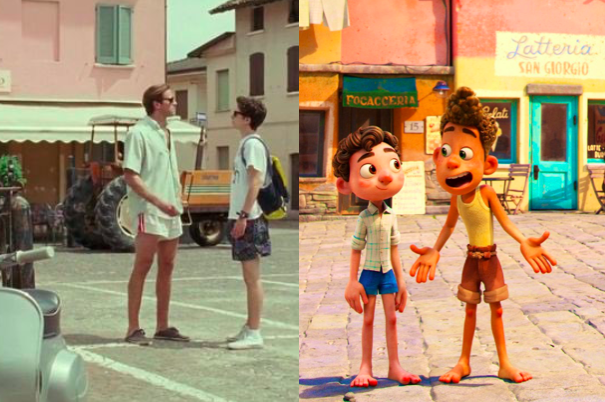 Call Me By Your Name was trending on Twitter this morning after Pixar released the trailer for its new film Luca and people started calling it the animated version of the 2017 film starring Timothée Chalamet and Armie Hammer.

The similarities between the two films are striking, to say the least.

Like Call Me By Your Name, Luca is set in a charming seaside town on the Italian Riviera and is a coming-of-age story about a young boy experiencing a transformative summer filled with gelato, pasta, and endless scooter rides with his new BFF.

Director Enrico Casarosa has called the animated film a “deeply personal story for me.”

“Childhood friendships often set the course of who we want to become and it is those bonds that are at the heart of our story,” he said in a recent interview. “So in addition to the beauty and charm of the Italian seaside, our film will feature an unforgettable summer adventure that will fundamentally change Luca.”

the animated version of ‘call me by your name’ is here pic.twitter.com/VJx3xzxTWl

Guy who has only seen CMBYN, watching his second lgbt movie: Getting a lot of 'Call Me By Your Name' vibes from this…

Audiences in 2017: “I can’t decide if I love The Shape of Water or Call Me By Your Name more”

Pixar releasing Luca in 2021: “what if… you didn’t have to choose?” pic.twitter.com/R62UOLxEoL

So Luca is just Pixar’s retelling of Call Me By Your Name, right?

call me by your name found dead in a ditch https://t.co/TsBuzvNW9b

the similarities between call me by your name and luca pic.twitter.com/QvYUQ2frS8

CALL ME BY YOUR NAME is trending, which means I will once again state my confusion that everyone loved and praised a movie that romanticizes a relationship between a confident 24yo and an immature & confused 17yo

shut up about call me by your name oh my god

i’m so conflicted about call me by your name, especially with armmie’s cannibalism and the fact that the movie is apparently about glorified pedophilia??? but somehow the movie is iconic??? guys so what do i do

Then there are those who saw “Call Me By Your Name” trending and got all excited thinking Lil Nas X had finally (finally!) released his highly-anticipated new song that he first announced last summer…

saw call me by your name trending and thought it was lil nas x. i am upset now

Me after seeing "Call Me By Your Name" trending and assuming it was about @LilNasX but then finding out its just about a pixar movie.. pic.twitter.com/H3GtRI7sp7

Call Me By Your Name is trending and it's mf's comparing a movie about pedophilia to a pixar movie. im so disappointed. @LilNasX please drop the song bro.

call me by your name was trending and i thought @LilNasX dropped the song.