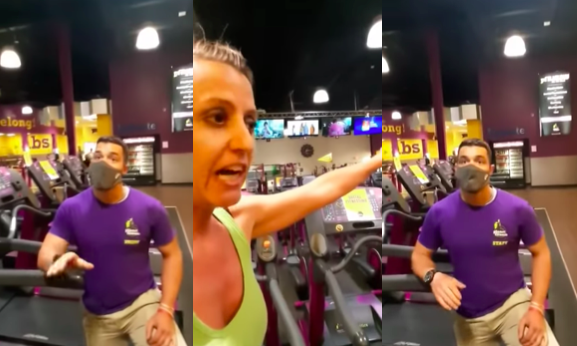 An anti-masker from Ohio had an on-camera meltdown inside a Planet Fitness facility. But it’s not her atrocious behavior that’s got everyone talking. Unfortunately for her, her antics have been upstaged by the super hot personal trainer she’s yelling at.

The video was first uploaded to Reddit last week. It shows the woman, later identified as Anna Peric, shouting at a personal trainer and a security guard after they politely inform her that she needs to wear a mask inside the facility, per a state mandate issued by the governor.

“I have limited time to exercise,” Peric shouts, “and all you’re doing right now is cutting into my freedom of liberty! I want to exercise! I pay to exercise!”

Karen, er, Peric then goes on to claim people who are exercising are exempt from the mask mandate.

“When you came in you did not have a face mask on,” the personal trainer tells her. To which Peric responds by saying he’s making her feel uncomfortable, “If you could please leave me alone so I can exercise, because, at this point, I feel like I’m being harassed.”

Commenters on Reddit were quick to condemn Peric for being awful… And to praise the personal trainer for remaining so calm and collected during the exchange.

“This employee’s patience turns me on,” one person wrote.

To which someone else replied, “Wall calendar idea: ‘Patient employees of Planet Fitness.'”

But the showering of compliments didn’t stop there.

“He looks handsome as f*ck,” one person observed. “I’m like just point the camera at him so this is a little more bearable.”

“He’s a gentle giant and I’d like him to carry me over the threshold,” someone else commented.

“I hadn’t even watched or clicked the audio yet and my first thought was ‘damn he’s cute,'” yet another person wrote.