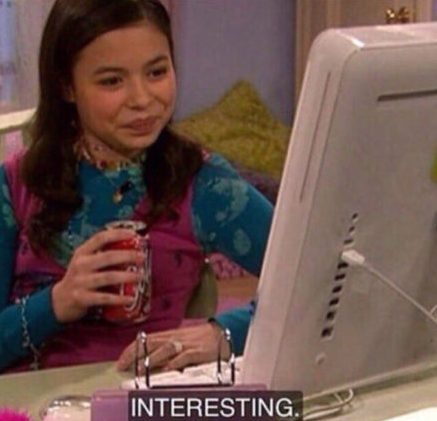 An ancient meme from the Nickelodeon series Drake & Josh is currently being recycled by LGBTQ people to recall the first time they realized they were gay.

A little back story: The meme comes from the 2006 episode “Mindy Loves Josh,” in which Mindy dumps Josh in hopes that it will inspire him to win first prize at the science fair.

At one point during the episode, she sits down at her computer to research an epidermal parasitic skin disease. As she sips her can of cola, she comments that it’s “interesting.” And so the meme was born.

But, like all memes, its shelf life was short-lived and it was quickly forgotten about.

Well now, almost 15 years after that original episode aired, gay people have brought the meme back to life.

It all started last week when someone shared the image on Tumblr alongside a photo from the series Smallville depicting actor Tom Wellington shirtless with his arms chained over his head and the caption “12-year-old me realizing I’m gay.”

And so started the trend.

Can I get an Amen!?😅 pic.twitter.com/YPepENQ6kZ

Mine was Rodrigo Santoro. Hahaha pic.twitter.com/OUZiBhnO0d

Since my celebrity crush recently became problematic, I have to resort to this… pic.twitter.com/DKsELv7Dh7