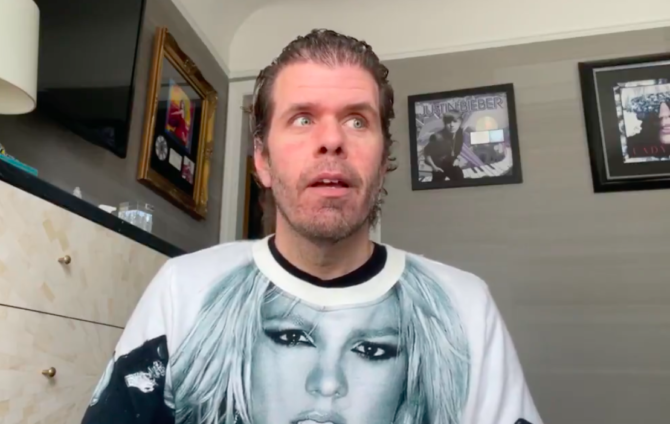 Perez Hilton has been a Britney Spears apology tour all week, tweeting articles in defense of the pop star and reexamining his role in her tragic story. Unfortunately, self-reflection has never been his strong suit and so things aren’t going too well for him.

Throughout 2007, Hilton documented Spears’ very public mental health breakdown almost daily, calling her an “unfit mother” and wishing her dead, going so far as to peddle t-shirts after Heath Ledger’s 2008 passing that said “Why wasn’t it Britney?”

But it didn’t end there. Just last year, he called the singer “an embarrassment” and said her mental health struggles were a result of her “party lifestyle” in his memoir “TMI: My Life in Scandal.”

In an interview with Sky News this week, the 43-year-old chalked up his past treatment of Spears to being “young and dumb,” adding that much of it was out of “concern for her young children.”

The obvious question, of course, is why, if he was so worried about her kids, did he continue to torment their mother and wish her dead?

Hilton doesn’t seem to have an answer for that, other than to say he didn’t “express myself as well as I could have” and that he carries “deep shame and regret” for what he did.

But in a video posted to social media on Wednesday titled “My Message To Britney Spears And The Free Britney Movement”, he played the victim, saying he’s been receiving “so much hate and bullying from people who were and are upset about how I used to talk about Britney Spears” and that it’s not fair.

“My message to all those people is: f*ck you!” he said. “It just does not compute that you’re going to bully someone for bullying somebody in the past. How does that make you any better than what I did?”

From the heart. Watch this video in full HERE: https://t.co/v0HYRFXQDU pic.twitter.com/zCIonottqB

You know what also doesn’t compute? Recording a video that’s supposed to be to Britney Spears but then making it all about yourself and saying “f*ck you” to people who are holding you accountable.

Speaking to Don Lemon on CNN last night, the blogger said he terrorized Spears “for attention” and that, at the time, he “didn’t care” if he hurt her, comparing himself to… a drug addict?

He said he was fully aware at the time that what he was doing was “wrong” but that he was sort of like a “drug addict who might steal from a loved one or does something that they know they shouldn’t do but they do it anyways.”

Hilton went on to claim he apologized privately to Spears last year… in an email. Because nothing says “I’m sorry” like a message sent from one’s iPhone. He also said someone confirmed that she saw the email, but she never responded.

We can’t say we blame her.