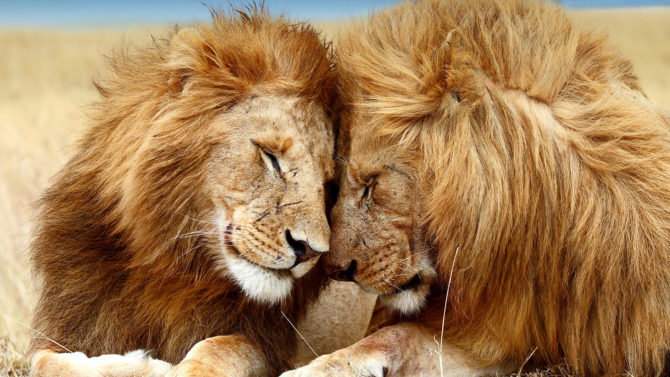 Remember that time a wildlife photographer snapped photos of two male lions going at it?

You might also recall that Ezekiel Mutua, head of the Kenyan Film Classification Board, tweeted that those lions were probably “influenced by gays who have gone to the national parks and behaved badly,” per NewNowNext.

Reddit recently rediscovered Twitter user @AngryAussie’s perfect responseto Matua’s comment. “Personally, I say hats off to the gay tourists who were willing to f*ck in front of lions,” @AngryAussie tweeted at the time.

Personally I say hats off to the gay tourists who were willing to fuck in front of lions. pic.twitter.com/7UL7pnGIfw

And even now, nearly four years later, Redditors have more jokes on the matter.

“The gay agenda was never for people,” one wrote.

“Lions have always been gay — that’s why they call it a Pride of Lions,” another commented.

One Reddit user suggested that “friend of the lions” is the new “friend of Dorothy,” and another replied that Dorothy “did have a lion friend and he was the gayest of them all.”

Related: This is what happens when you interrupt two male lions having sex

In case you missed the original story, here are the delightful comments photographer Paul Goldstein gave MailOnline after playing accidental voyeur to the, ahem, mane attraction.

“This was not only surprising but it was impossible not to smile. When lions mate it normally last a few seconds, these two were at it for over a minute, and the obvious affection afterwards was very evident. … Even as he dismounted, he did not back off as is normal after mating. He crept round to the other male’s muzzle for a nuzzle and threw a conspiratorial wink his way.”