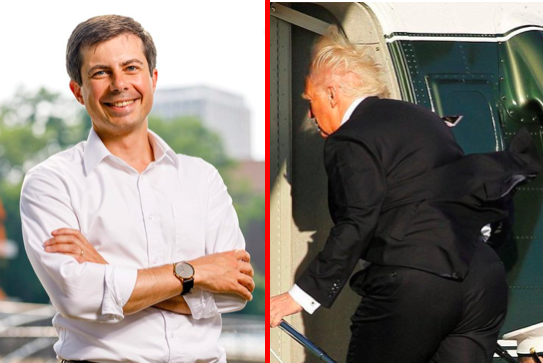 TMZ caught up with Mayor Pete Buttigieg shortly after Donald Trump’s campaign rally in New Hampshire this week during which the President of the United States fat-shamed a man who he mistook for a protester but who was actually one of his supporters.

Like his fat ass has the nerve to body shame.@realDonaldTrump"Trump mocks a protester's weight during his New Hampshire rally" https://t.co/k14TT5EwTR

When asked to about the incident, Buttigieg replied, “People in glass houses…” before pausing for a moment, then adding, “Look, nobody should fat-shame anybody, but certainly, I mean, I’m not even gonna say it. Nobody should fat shame anybody.”

Buttigieg was then asked about Trump’s interest in buying Greenland, which, for the record, is not for sale.

“We just went into a huge deficit led by this president and his Republican allies,” he replied. “The last thing we should be doing is looking for other countries or land masses to buy.”

“We got enough to do taking care of the United States,” Buttigieg continued. “I think they’re all set over there without our help right now.”