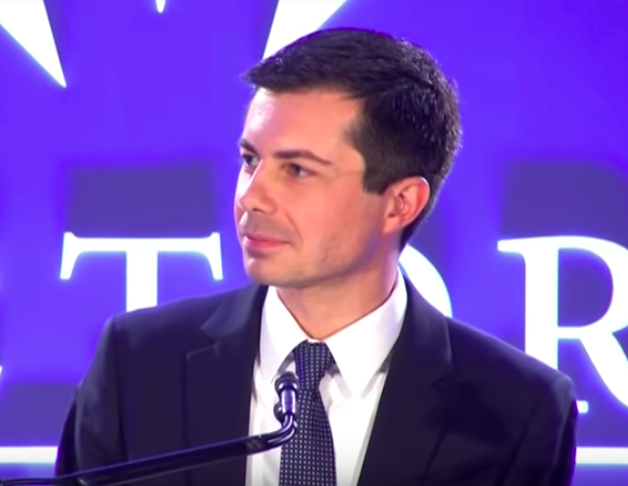 2020 hopeful Pete Buttigieg had a very good week last week. And it continued into the weekend, when he headlined a brunch for the LGBTQ Victory Fund in Washington D.C. on Sunday.

“As a kid I was hoping one day I’d be an astronaut,” he said during his speech, “but no way would I have believed that one fine day in the spring of 2019 I would be standing in a ballroom in Washington, 37 years old, a veteran of the war in Afghanistan, in my eighth year as mayor of my hometown, a couple hours after going on Meet The Press as a credible contender for the American presidency, with my husband looking on from his table!”

During the 20-minute speech, Buttigieg spoke candidly about the challenges of growing up gay, saying he still feels “uncomfortable” when he talks about it:

When I was younger, I would have done anything to not be gay. When I began to halfway realize what it meant, it launched in me something I can only describe as a kind of war. And if the war had been settled on the terms that I would have wished for when I was 15 or 20 or, frankly, even 25 I would not be standing here. If you had offered me a pill to make me straight, I would’ve swallowed it before you had time to give me a sip of water.

Related: Christian extremists are gonna be pissed when they hear what Pete Buttigieg just said

He also talked about meeting his husband, Chasten, on the apps:

One day I was skimming through profiles on an app. Possibly not the app you’re thinking of. I looked through the little screen on my phone and I saw this smile. This guy. And I clicked the button on the right because I had to meet him. And one of the best things about these last couple months has been watching America meet him too.

Then he talked about their marriage, and what marriage means to him, saying, “and yes, Mr. Vice President, it has moved me closer to God.”

“If being gay is a choice,” he added, “it was a choice that was made far above my pay grade.”