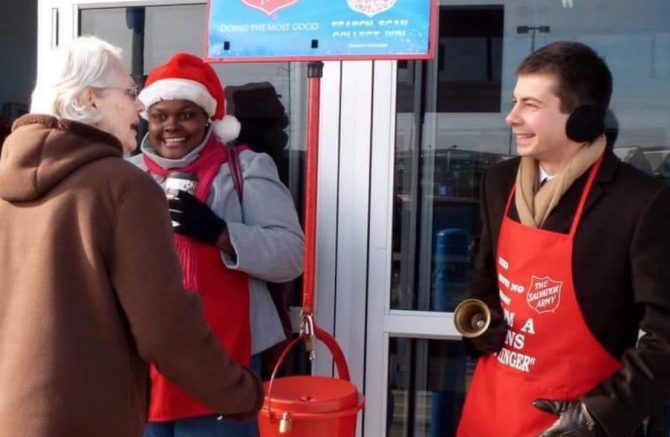 A photo has resurfaced of Pete Buttigieg volunteering for the Salvation Army, and reaction has ranged from shock to shrug.

The organization has a long and well-documented history of discriminating against LGBTQ people, raising questions as to why Buttigieg would show it pubic support. It has turned people away from shelters for being transgender and lobbied against marriage equality and anti-discrimination legislation.

The out presidential hopeful has reportedly been collecting donations with the group for years and even held a mayoral event at a Salvation Army center in 2018.

Related: Here’s The Internal Document The Salvation Army Doesn’t Want You To See

“How can you have your preferred pronouns in your bio yet ring a f*cking bell for a homophobic & transphobic organization,” someone asked. “What next? Is he gonna be posing and eating a chick-fil-a sandwich?”

“I really can’t stand this story,” countered another. “Mayor Pete was out on the streets helping vulnerable people, and you slate him because it’s for an organisation that itself is questionable. But his charitable work isn’t questionable, and it doesn’t make him less gay.”

Related: Officer Speaks Candidly About Life And Struggles As A Bisexual Man Inside The Salvation Army

“As we build and remodel emergency shelters and transitional housing across the country, we consider ways to help LGBTQ+ individuals feel safe and cared for,” he said, pointing to recent initiatives specifically supporting LGBTQ folks like a homeless shelter for transgender people in Las Vegas.

Buttigieg has not publicly commented.