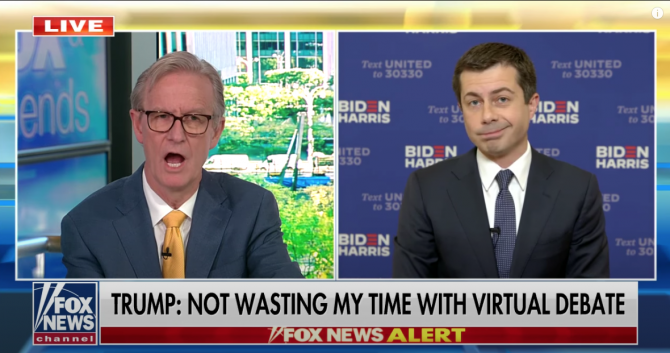 Pete Buttigieg is emerging as our favorite Fox News presence of the 2020 election for his ability to calmly cut through Trump and Pence’s nonsense without ever stooping to their level of name calling and personal insult. Michelle must be so proud!

Shortly after landing an epic clap back against Vice President Mike Pence ahead of this week’s VP debate, Buttigieg was back on the “fair and balanced” cable network to discuss Trump’s decision to participate in the next debate if it’s not in person.

Responding to the president’s refusal to take part in a virtual debate, Buttigieg said: “Well, it’s too bad, I don’t know why the president’s afraid to participate in a debate.”

He then pointed out that millions of Americans are being forced to adapt to virtual versions of regularly in-person events — a new reality that Trump arguably had a hand in creating. At a time when “parents are having to deal with e-learning” and so much of the country is on Zoom, Buttigieg says the president’s refusal is tone deaf.

“I think part of why the U.S. is falling behind, is badly behind the rest of the developed world on dealing with the pandemic is because every time there’s been a choice between doing something that’s more safe or less safe, this president seems to push for less safe,” Buttigieg said. “I think it’s also a reflection of the weakness of his campaign. You know, when you see campaigns getting the kind of bad news that he’s been getting through this month, a lot of times you’ll see these kind of increased arguments over rules, withdrawing from opportunities, a little bit of flailing there.”

He ended by offering what seems a pretty valid explanation for Trump’s behavior: “Maybe the president doesn’t care about other people.”