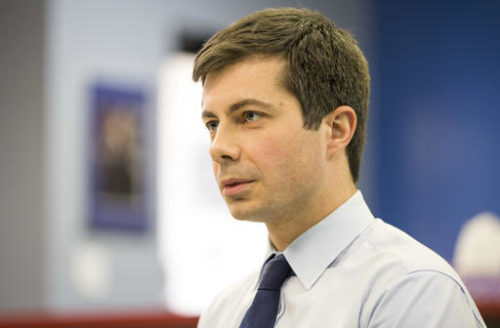 Pete Buttigieg is enjoying a honeymoon with the media and the public. His California fundraising swing last week raised millions, with LGBTQ donors and potential voters responding to his appearances with rapt appreciation. Gay Facebook was suddenly awash with Pete selfies.

Glowing profile follows glowing profile, with unlikely people–like hard-core Republicans–expressing their admiration for the candidate. Even Rush Limbaugh had kind words to say about Buttigieg, telling his listeners to “keep a sharp eye” out on the mayor. Political coverage runs in cycles, and the pendulum is likely to swing back in the other direction soon enough.

The main question that reporters will hurl at Buttigieg is whether, at 37 years old, he has enough experience to be president.

Buttigieg’s supporters will no doubt point to the existing White House occupant as proof that age and experience are poor markers of ability. That’s true as far as it goes. And Buttigieg’s contrast to Trump is a large part of his appeal. With his thoughtfulness and non-confrontational manner, Buttigieg couldn’t be more different than a man who can barely speak one language, let alone Buttigieg’s seven.

But comparing Buttigieg to Trump is a low bar, and it won’t satisfy the inevitable questions about whether Buttigieg has the credentials to be president. Being mayor of a small midwestern city isn’t the same as serving as commander-in-chief of the entire federal government.

Just to put it in perspective: Buttigieg is serving as mayor because 8,515 voters in South Bend re-elected him. His city has a budget of $380 million, compared to the federal budget of more than $4 trillion. There are 2.1 million civilian federal workers, compared to about 1,000 in South Bend.

Buttigieg has said that he “would stack my experience up against anybody.” He argues that he has more administrative and military experience than either of the past two presidents, which is true. Still, Barack Obama had at least served in the U.S. Senate, and Trump ran a large real estate company (like a mafia boss, but that’s a separate issue.)

The closest comparison to Buttigieg is Leo Varadkar, Ireland’s first gay prime minister. Varadkar was 38 when he was elected in 2017 in a country that has seen the same sort of rapid rise in acceptance of LGBTQ people that the U.S. has.

The two have so much in common it’s rather remarkable. Like Varadkar, Buttigieg was raised Catholic and educated in Catholic schools. (Buttigieg has since become an Episcopalian, while Varadkar no longer practices.) Both have immigrant fathers–Buttigieg’s from Malta, and Varadkar’s from India. They both even came out in the same year, 2015.

The similarities don’t end there. Both are whip-smart. Both are in happy relationships. Both are unafraid to speak out about religion. While Buttigieg is trying to reclaim faith as a liberal value, Varadkar has been defending the role of religion in Irish society.

Varadkar was a bit more subtle in his dig at Pence but just as effective. Varadkar brought his partner to a breakfast meeting with the vice president, which Pence sat through with all the enthusiasm of a man who would rather be undergoing a root canal.

There are some major differences between Varadkar and Buttigieg, however, especially when it comes to experience. Unlike Buttigieg, Varadkar had a more traditional path to success, serving in several minister-level positions in previous governments. After getting off to a strong start, Varadkar has been struggling in the polls of late, largely because of his handling of some domestic issues. Even with his slide in polls, Varadkar remains more popular than any other Irish party leader.

So why are potential voters so smitten with Buttigieg that they are willing to overlook his relatively thin resuméè? Interestingly, retired Congressman Barney Frank thinks that Buttigieg’s gayness is serving as an antidote. “He’s a very young guy who’s been the mayor of a medium-sized city,” Frank told the Washington Post. “I think, frankly, he’s getting more favorable attention than he otherwise would have because he’s gay. Which I think is great.”

While being gay helps Buttigieg stand out in the field, what really marks him as a different type of candidate is his thoughtfulness. He doesn’t talk like other politicians. He’s offering long-term solutions to systemic problems in the political system.

In short, experience is not Buttigieg’s strong suit and is never going to be, at least, not this round. (His military experience is definitely a plus, though.)

Mayor Pete’s supports point to a different comparison. What Buttigieg is offering is what Obama did in 2008: hope and change.

It’s worth remembering that one of the knocks on Obama in 2008 was that he lacked experience. He had just two years in the Senate and was derided by Republicans for being a “community organizer.”

Lost in that criticism was the fact that Obama had an outstanding background: a graduate of Harvard and Harvard Law, where he was president of the law journal. In addition, he was a loving husband who had dedicated a portion of his career to community work. In short, the kind of characteristics you’d expect to see in a president. Coupled with all of that was Obama’s call for a better America that resonated with the voting public and his history-making campaign.

All of which sounds a lot like the qualities that Buttigieg has to offer. Having taken a chance on Obama and succeeded, Democrats in 2020 may be willing to consider experience less important than the ability to inspire.

If that’s the case, Buttigieg has a real shot at moving from South Bend to Pennsylvania Avenue.