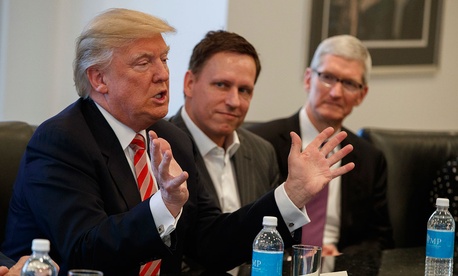 Yep, the Trump supporting billionaire Peter Thiel is connected is to the scandal involving Facebook and Cambridge Analytica, the shady data firm that harvested personal data to create geo-targeted bogus news items for the Trump campaign. As it turns out, an employee at Thiel’s firm Palantir gave a helping hand to Cambridge Analytica at a crucial point in the firm’s data collection development. Why are we not surprised? No word on whether Thiel had any idea this was going down.

At first, Palantir issued a statement that it had no connections to Cambridge Analytica. But it quickly had to backtrack, saying that Chmieliauskas was not acting as a Palantir employee.

Related: Peter Thiel may be leaving San Francisco for the American heartland: Hollywood

But he may not have been alone. According to testimony to British lawmakers by Christopher Wylie, the gay former Cambridge Analytica employee who blew the whistle on the firm’s shenanigans, multiple Palantir employees helped Cambridge Analytica.

“There were senior Palantir employees that were also working on the Facebook data,” Wylie told a parliamentary committee on Tuesday. “There were Palantir staff who would come into the office and work on the data.”

Palantir’s expertise would come in handy. The firm specializes in big data analysis, and its clients include the U.S. government, for whom it does counter-terrorism work. Yes, the libertarian Thiel’s company depends on federal, taxpayer-funded, contracts. Peter better hope Trump does not drain the swamp of contractors, too.

There’s no indication that Thiel knew anything about the connection between Palantir, which he co-founded, and Cambridge Analytica. But the news does connect him to a complex web of relationships and adds a complicating layer of intrigue to his narrative.

Thiel famously supported Trump in 2016, speaking out for him at the RNC convention. Cambridge Analytica was founded by Robert Mercer, who helped bankroll Steve Bannon and Milo Yiannopoulos. The firm apparently used subterfuge to gain access to personal information on 50 million Facebook users, and then turned around to create fake narratives for targeted audiences promoting Trump or dissing Clinton.

But it’s not just Thiel’s connection to the Trump campaign that matters. More important is his investment in Facebook, which has been increasingly under fire for its cavalier attitude toward the privacy of its users. Thiel was an early backer of the social media giant and is a founding member of its board.

He’s also been quick to dismiss criticisms that Facebook could have done more to intervene with the promotion of fake news on the site, particularly from Russian hackers.

“Remember when Trump said the election was going to be rigged? People said that was crazy — ‘How dare you question the integrity of the electoral process?’ That was the view of most of the people working at Facebook, too,” Thiel told The New York Times recently. “They did not think things were so hackable. It was a mistake, but an understandable mistake.”

Of course, when Trump said the election was going to be rigged, what he meant was that he would legitimately lose and not be willing to admit it. As for Facebook not knowing what was happening under its own nose–there’s a big difference between a mistake and willful ignorance. As more news emerges about the role Palantir had to play in the Cambridge Analytica scandal, we will get to see whether a firm as sophisticated as Palantir can credibly plead it was all just a mistake.