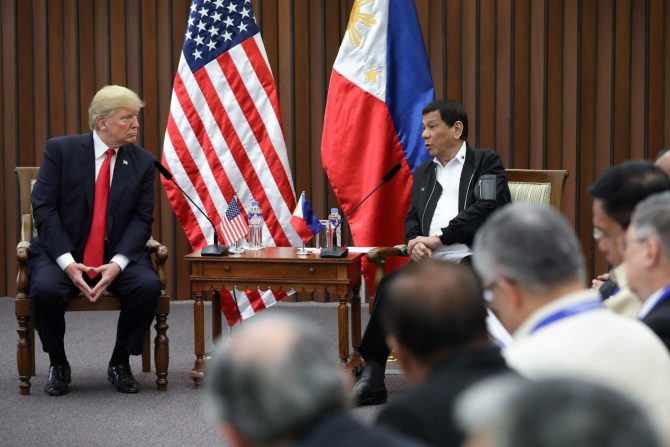 Philippine President Rodrigo Duterte just referred to himself as a “cured” gay.

Duterte made the statement during a joint summit in Tokyo with Prime Minister Shinzo Abe of Japan. During a speech there, Duterte referred to his longtime political rival, Senator Antonio Trillanes IV, as gay.

“You ask any gay person who sees Trillanes move, they’ll say he’s gay,” Duterte said in his remarks. “Good thing Trillanes and I are similar. But I cured myself…When I began a relationship with [Ex-wife Elizabeth] Zimmerman, I said, this is it. I became a man again.” Elizabeth Zimmerman is Duterte’s ex-wife. The couple married in 1973 and divorced in 2000. Duterte has often boasted of his many infidelities during the marriage.

Related: Philippines Chooses Film About An Elderly Gay Man To Represent It At Academy Awards

Duterte also has a long history of disparaging political rivals as homosexuals. Earlier this year, he referred to Philippine Senate candidate Florin Hilbay as gay and claimed the then-Solicitor General kept an office full of homosexuals.

Often compared to Donald Trump, Duterte has a long history of controversies. He admitted to murdering three people while Mayor of the city Davao, and defended assassinations of journalists. He also encouraged mass rape of women by the Philippine army during an internal conflict in the state of Maute.

Somehow, we find the notion that Duterte cured his sexuality suspect. Call it a hunch. Maybe he should try going back in the closet…or just secluding himself in a closet so we don’t have to listen to his nonsense.