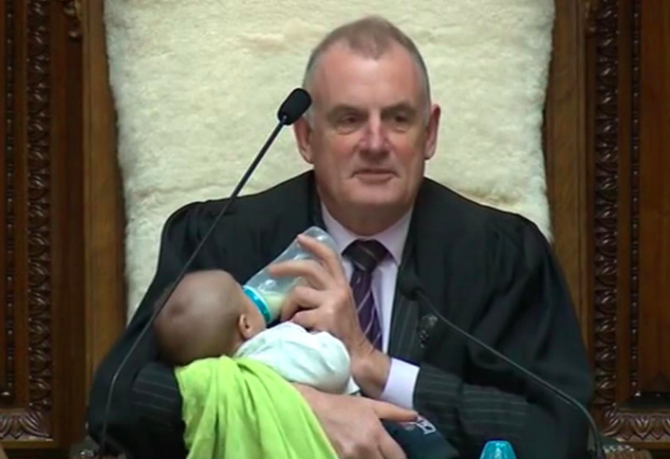 A photo of the Speaker of New Zealand’s Parliament babysitting for a fellow parliamentary member, who happens to be gay, while he was debating on the floor of the country’s House of Representatives last Wednesday has gone viral.

In the photo, Speaker Trevor Mallard can be seen cradling and feeding a newborn while overseeing the debate in the legislature. The baby, born last month, is the son of Member of Parliament Tamati Coffey and his partner, Tim Smith.

Coffey, who came out publicly in 2009, had just returned from paternity leave and brought his newest family member to work with him. He first introduced his son, Tutanekai, to the world via Twitter last month.

??? Hey Son. We toiled over your name. We’ve told the tribe, we’ve done your numbers and we’ve come up with ten good reasons why your name should be so.

Speaker Mallard tweeted the photo of himself and baby Tutanekai along with the caption: “Normally the Speaker’s chair is only used by Presiding Officers but today a VIP took the chair with me. Congratulations @tamaticoffey and Tim on the newest member of your family.”

Normally the Speaker’s chair is only used by Presiding Officers but today a VIP took the chair with me. Congratulations @tamaticoffey and Tim on the newest member of your family. pic.twitter.com/47ViKHsKkA

So far, Mallard’s tweet has received over 2,500 retweets and nearly 12,000 likes, and has proven to be quite a hit with the commenters.

This is leadership of the highest order. https://t.co/3IlCE6FEhN

New Zealand….you might be a small country, but you have a huge lesson to teach the world! Great photo!

U r awesome. BTW, should your nation ever considered buying the US? . If u r strapped for cash, I’m all about starting a go- fund- me.

I understand bringing a child to work isn’t always possible for a number of reasons but I love that in this case, it happened, and the people in that room were helpful and understanding. We need more of that in this world. https://t.co/F2mrBJ0elU

A presiding male speaker babysitting for a same sex couple’s child…here in the United States, the GOP’s heads would explode!

These are dark times over here in United States. These beautiful pictures are making my day!

New Zealand is just showing off now. Here is the @NZParliament Speaker feeding a male MP’s baby IN THE DAMN HOUSE ? https://t.co/JUMiUvHjAs