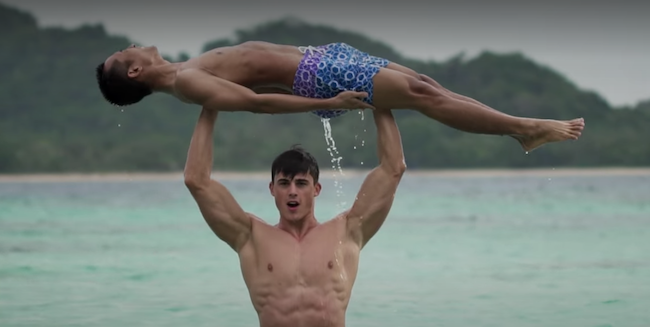 Physique model/maths teacher Pietro Boselli has responded to negative comments on Facebook accusing him of racism.

As we reported yesterday, Boselli posted a video on Sunday in which he lifts a Filipino man as part of an impromptu workout routine. As of this post, the vid has garnered 30k reactions and over 4.2K comments.

“So the faq he think about Filipinos,” one commenter writes. “Fucking savages and animals? Approach him really slowly because he is going to start running?”

“This is outrageous,” writes another. “The Filipino man… doesn’t have a name, neither do we see his face clearly, nor do we hear him speak. He is purely an object to be used by the white man, and must be approached ‘slowly because he can get scared and start running,’ just like a wild animal?”

Related: Did Pietro Boselli accidentally show his wares during this photoshoot?

A third commenter writes: “I’m sure you mean well but IMHO this video is in poor taste. Reinforces racial stereotypes by using the Filipino island guy as a prop. Sadly good looking people who try to be funny usually fall short. Agree to disagree.”

On and on. Others told everybody to calm down: “So funny reading comments like he really chased down some filipino stranger and used him to workout,” one commenter states. “It’s obviously his friend.”

“I’m a Filipino and found this funny,” writes another. “Stop being sour grapes! OBVIOUSLY this was meant to be a comedic video! You and your ‘oh, no other race should make fun of us but us’ mentality. You guys definitely need to get your senses checked.”

“Too many people taking this funny video way too seriously,” writes a third.

Boselli has responded to these accusations in a written statement to The Telegraph:

“I am so far removed from racism that I cannot possibly see anything racist about a funny video I have made with my friend Danel (the Filipino man in the video).

“We all have differences but we are all the same as human beings. I have and always will respect everyone.

“If anyone sees any racism in this video, they probably have racism in their head. I and Daniel alike, still think this is a light hearted and funny video.”

What do you think? Is the video problematic, or are people reading far too much into it? Sound off in the comments below.