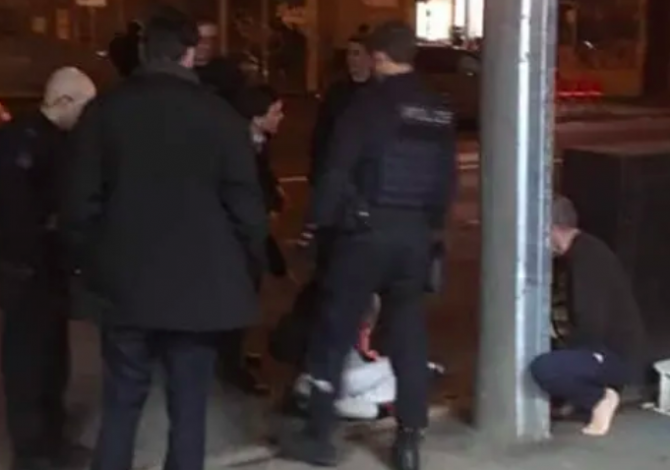 Nik Dimopoulos is a gay club promoter from Melbourne. Last weekend, he was slammed to the ground, beaten, and arrested by police outside of Hares and Hyenas, a popular LGBTQ bookshop in Fitzroy, a suburb in northern Melbourne.

The attack happened at around 2 AM on Saturday morning. According to the shop’s co-owner, Rowland Thomson, police stormed into the garage attached to his store after mistaking Dimopoulos for a suspect in a carjacking case.

“The police broke in through our garage as they thought that an armed member of a ‘Lebanese’ gang was inside,” Thomson wrote in a Facebook post.

“At no stage did they identify themselves as police. They just stormed into a dark room shining torches and it was impossible to identify them as police.”

Dimopoulos, who was inside the bookstore, panicked and fled the building “thinking it was an antigay home invasion.” That’s when police tackled him on the street, breaking his right arm in several places and injuring his shoulder.

According to his lawyer, Jeremy King, Dimopoulos was rushed to a hospital where he underwent emergency surgery. King also said his client’s “only crime was looking Middle Eastern.”

But the head of Victoria’s police union, Wayne Gatt, insists officers “made a lawful search and a lawful arrest of a suspect.” In fact, he’s “proud” of the way officers handled the situation.

Speaking to local media this week, Gatt said he’s proud because officers “did everything required of them, because they announced themselves as police, because they spoke to the occupants, because they searched the building properly, because they called on the suspect multiple times when engaging in that person before making the arrest.”

Except that, according to eye witnesses, they didn’t do any of those things. And then they arrested the wrong person, but not before using unnecessary force.

Gatt went on to say that he doesn’t think police have anything to apologize for.

“It’s never the situation where police want to see anybody injured,” he said, “but it’s always the situation that the community expects our police to do their job and to do it well.”

Meanwhile, King says Dimopoulos is still suffering “in a very bad way” and remains in the hospital wearing “the biggest brace I’ve ever seen.” Surgeons still don’t know if he will ever regain full use of his right arm.

A GoFundMe page created for Dimopoulos has raised almost $10,000 to help offset the cost of his medical expenses.