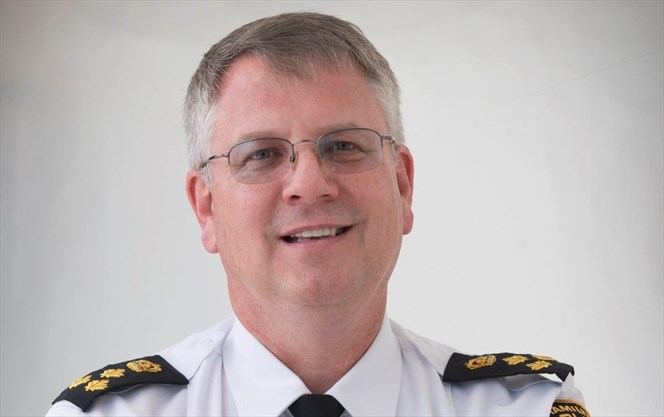 A police chief in Ontario says he’s really, really sorry for opening old wounds concerning gay men being arrested for having sex in public bathrooms when talking about bridging the gap between his department and the LGBTQ community today.

Eric Girt is Chief of Police in Hamilton, Ontario, one of the largest major municipal law enforcement agencies in the Province of Ontario.

On Tuesday, he appeared on a local radio program to talk about how his department is working to repair its fractured relationship with the LGBTQ community after its disastrous response to white supremacists storming Hamilton’s Pride festival in June.

Many felt police were deployed way too late and in insufficient numbers to handle the situation. Not only that, but they ended up charging several LGBTQ counter-protesters instead of the white supremacists who were harassing them.

On Tuesday, Girt sat down with radio host Bill Kelly to once again apologize for how the situation was handled and to discuss what he’s doing to make things right.

When Kelly asked about a forum held by police and members of the LGBTQ community last month, Girt brought up another time when the two groups successfully cooperated together: The time they worked to end gay cruising in public restrooms.

Girt explained how the cops listened to gay men’s concerns and “worked collectively to say, ‘OK, we understand that. This may be not the best place to do it, and I understand that you’ve got consenting adults who do that, but it’s in a public place so there’s kind of got to strike the balance there.'”

“So when you have consenting adults who engaged, it was fine; if you have conditions where you’ve got a youth involved or anything, that’s a whole other ball of wax,” he said.

What any of this has to do with white supremacists storming a Pride event is anyone’s guess.

“Yesterday, I made statements on CHML that were offensive to the 2SLGBTQ+ community. These comments were made as I attempted to illustrate a point about legislative change,” Girt said in a statement.

“I appreciate the impact of the words I chose and for this, I apologize. I recognize the relationship with our 2SLGBTQ+ community is strained but I am committed to repairing this relationship and moving forward.”

Cameron Kroetsch, a Pride board member, tells the Hamilton Spectator that Girt’s comments were offensive and that they only show Girt’s “not in a position to rebuild trust with anybody.”

“He just went back to this idea, frankly, this outdated trope, used by people to try and make it seem like the only thing that’s a concern to these communities is public sex,” Kroetsch said.

Meanwhile, a spokesperson for Mayor Fred Eisenberger said the mayor’s office is currently evaluating whether to launch an independent review of the Pride response.

Related: Police department offers jobs to 40 trans women & then outs them all