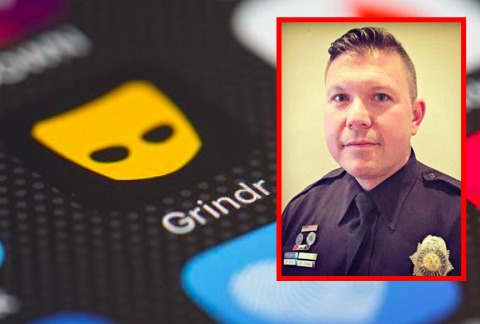 A police lieutenant from Denver is in hot, hot water after being accused of engaging in illegal drug use and leaving work to have sex with a man he met on Grindr while on duty.

Philip Epple is, er, was a lieutenant with the Denver Police Department, where he had served since 2001. In March, his fellow officers raided his house, where they found all sorts of illegal narcotics and steroids.

Epple was put on administrative leave after the raid. He announced his retirement a few weeks later.

Related: Cop busted for selling his body for sex on kinky adult website

Now, a man by the name of Matthew Otto has contacted Denver police to say he connected with Epple and Epple’s “husband” on Grindr and that the three regularly met up do to cocaine, ecstasy, and have sex.

According to the affidavit:

Otto stated that there were numerous times, at the beginning of the relationship, in which Epple would return to the residence while he was ‘on duty’ to have sex with Otto. Otto explained one occasion when Epple returned, got out of his uniform, got in the hot tub, and then redressed in his uniform and returned to work. Otto explained that, regardless of why Epple returned to the residence, when he was on duty, he would keep his ‘walkie talkie’ with him ‘in case he got called.’

Otto went on to claim that Epple regularly used cocaine, ecstasy and steroids during their hookups.

Epple has not been arrested or charged with any crimes (yet). In his retirement letter, he said, “It has been a pleasure being of service to the Department, the City and County of Denver, and to my community.”