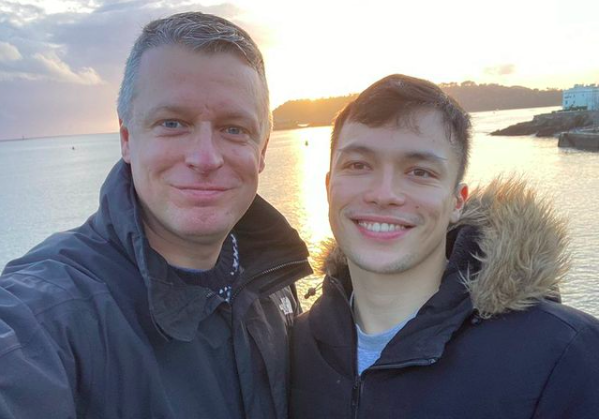 A British politician is getting the last laugh after being trolled by homophobes on Twitter over the weekend.

Luke Pollard is an openly gay Member of Parliament. On Valentine’s Day, he posted a sweet picture of himself and his boyfriend, Sydney Robertson, along with the caption, “Happy Valentine’s Day to my lovely boyfriend! X”

Homophobes on Twitter quickly attacked 40-year-old Pollard, accusing him of being a pervert and a pedophile for dating someone who appears to be younger than him.

One person wrote, “Love a father and son photo.” Another said, “What toy did he get with his happy meal??” And another commented, “He looks 12 years old, you should be locked up.”

Queerty was unable to verify Robertson’s exact age, but, honestly, it doesn’t matter. He’s clearly a grown ass man. And the guys have been together for several years, posting photos with one another on social media since at least 2017.

Thankfully, others on Twitter came to Pollard’s defense, rallying around the politician with messages of love and support.

You are lucky to have found each other. Gorgeous couple. Have a wonderfully romantic day! ❤❤

I wonder how any people would be commenting on the age difference if you were with a younger woman… like Trump, or Johnson (both with women young enough to be their daughters)?? Thanks for being open and honest about who you are.

What a cute couple! 🥰🥰 My partner and I are 23 years apart, we’ve been together for 9 years now. It makes me so happy when I see other intergenerational couples post on here. Wishing you a cozy and fun Valentines from California ☀️

Looks like a man of 40 has a boyfriend in his 20’s shock horror. I’ve not seen anything like that in a hetro couple. Happy Valentines

Happy Valentines to you both. It’s so refreshing and important seeing an LGBT+ politician being so open about their sexuality and their relationship. Thank you Luke. ❤️🏳️‍🌈

To all the people who worry about age differences: I’m 65, my husband is just coming up to 70 – and our gorgeous boyfriend is 31 …..

Speaking to PlymouthLive, Pollard said the negative reaction to the photo caught him a little off guard.

“In my mind, Valentine’s Day is all about love. My newsfeed was full of people sharing messages and pictures of their other halves,” he explained.

“Me sharing a picture of me and Sydney going on a walk with Plymouth Sound in the background, it’s no different to any of my friends’ pictures. It’s exactly the same thing [but we just happen to be gay].”

Pollard added that, in addition to be attacked for their age difference and for being gay, the trolls also criticized Robertson for his Chinese heritage.

“When you’re in the public eye, there will always be people who jump on you,” he said. “But there’s simply no place for this homophobic or racist comments.”

Ultimately, however, the couple didn’t let the haters get the best of them.

“I feel very sorry for the people who led the attacks,” Pollard added. “They must be pretty lonely if seeing other people happy is a threat to them.”

In the end, he ended up getting the last laugh when he saw his number of followers skyrocket, accumulating over 1,000 new ones in less than 24 hours.

Hello to the 1,000+ new followers from the last day. If you don’t like my page on Facebook why not follow me there too? https://t.co/aiuJvz1B4B or hop over to instagram for a more personal take on what I get up to https://t.co/GxLCDKHr3Q