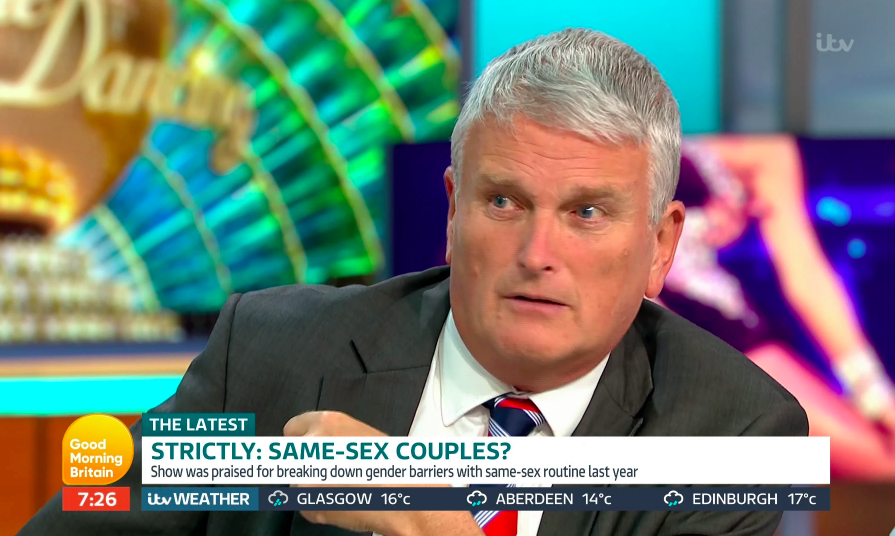 During a recent appearance on Good Morning Britain, Northern Ireland’s Democratic Unionist Party member Jim Wells made quite a fool of himself when he said LGBTQ people shouldn’t be shown on television before 9 p.m.

During the interview, the topic of Strictly Come Dancing (the U.K.’s version of Dancing With The Stars) arose. Specifically, the possibility of the show featuring same-sex dance partners. Wells was quick to say he opposed the idea.

“It’s family viewing,” he said. “You’ve had a busy week, you sit down with the family and you watch pure entertainment. The last thing you want is to be challenged or to be asked deep intellectual questions.”

Wells went on to explain that seeing two people of the same sex dancing together was “challenging” for young viewers.

“They’ll be asking why are the two men or the two women dancing,” he continued. “They want to be entertained. They don’t want to be challenged.”

When asked specifically what time he thought gay people should be allowed to appear on television, Wells referred to the BBC’s old stance on same-sex couples being featured on Strictly Come Dancing, saying, “Exactly the same time as the BBC thought two years ago, 9pm.”

Things quickly unravelled from there.

Speaking to The Belfast Telegraph, Wells, who was ousted from his post as health minister in 2015 after claiming kids of same-sex parents were “more likely” to be abused, doubled down on his antiquated beliefs.

The 62-year-old said he was done watching the reality dance competition, which he once believed was “wonderful family viewing,” after it announced it was open to the idea of featuring same-sex dance partners.

“Now we’ve decided to introduce same-sex partners as demanded by the LGBT community,” he lamented. “This goes out at 7.30pm on a Saturday evening when families want to sit down and watch something that won’t be challenging, won’t ask any awkward questions, won’t be embarrassing.”

“It’s going to ruin it for family viewing.”

Sounds like the only person “ruining” anything is Wells.