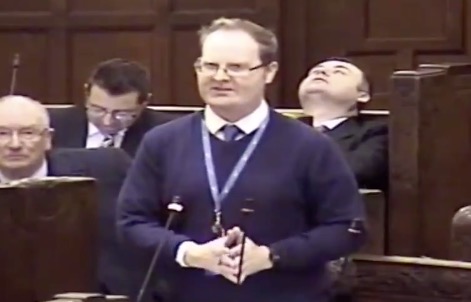 Last week, Queerty brought you the story of a city councilor in the UK who gave a bizarre antigay rant during a council meeting.

Glenn Williams, who serves on Coventry city council in the Midlands of England, was speaking out about what children are being taught in schools. He took particular umbrage upon hearing that a teacher had talked about “coming out” and shown kids an image of two women kissing – something he regarded as “pornography.”

Local schools in the area hit the headlines last year because of parent protests over lessons that included diversity awareness and anti-LGBTQ bullying initiatives.

His speech was caught on camera and went viral on social media, leading some to call for his resignation.

Instead, Williams accepted an invitation to sit down on Tuesday with local Pride organizers, other city councilors, and gay teacher Andrew Moffat. The award-winning educator is the man behind the ‘No Outsiders’ education project that has prompted some parents to complain.

It seems the meeting had a big impact on Williams, who apologized for his previous remarks.

Coventry Pride posted a video about the meeting on Wednesday. Williams apologizes at the 3.25 mark.

“I’m really grateful to have met with members of Coventry Pride. They have really helped me a lot, more than people might realize.

“I just need to tell you, to members of the LGBT community and others, I owe you such a big apology and that is meant very sincerely, very sincerely indeed.

“The unfortunate use of words – not intended to cause offense and I had no idea about how far that would go – and actually I’m really grateful to Coventry Pride for what they have done tonight and what I hope we can do in the future.”

Nyasha Pitt, vice-chair and trustee for Coventry Pride, said, “We will be working with Cllr Williams to further his education and we ask that the community gives us the time to do that.

Williams also took to Twitter to say he had benefitted from the conversation.

“I’m glad we all came together for frank discussions. It helped me and I hope it helped you.

“I owe you more than an apology; let’s keep working together to help benefit children, parents & all of our residents from across different communities.”

I’m glad we all came together for frank discussions. It helped me and I hope it helped you.

I owe you more than an apology; let’s keep working together to help benefit children, parents & all of our residents from across different communities.

Williams has also offered to further his education in other ways.

When the original video of his speech surfaced last week, a local radio DJ asked Williams online if he’d like to join him at a well-known local gay bar, The Yard, for a drink.

We will even give you a free drink, as long as you leave your bigoted views outside! ☺️💕

The Yard bar tweeted it would happily host the councilor and give him a free drink if he left his views, “at the door.”

Williams responded Wednesday: “I am happy to meet at @TheYardCoventry and talk to any of the clientele if they will have me. I hope the offer of a free gin & tonic is still available.”

I am happy to meet at @TheYardCoventry and talk to any of the clientele if they will have me. I hope the offer of a free gin & tonic is still available.

In a later tweet, he told the DJ, John JD Dalziel, “I will ask my secretary to check my diary, then I will get back to you privately.”

This is not the first time Williams has apologized for causing offense. In 2016, he made headlines when details of a Whatsapp conversation became public. In it, he said that non-English speakers should “go home” and that he “didn’t believe in multi-culturalism.”

He told press at the time he stood by the comments, which were just meant as “banter,” but apologized if anyone took offense to them.