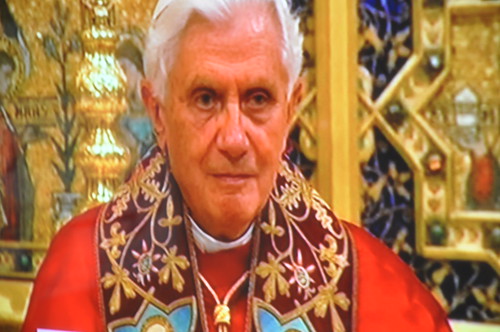 To say that Pope Benedict XVI’s first official state visit to his homeland Germany has not gone well is a bit like saying that the Vatican is a bit behind the times. Both statements are true, but what matters is the order of magnitude. (For the record, the Vatican is multiple centuries behind the times.) What should have been a triumphant return as Germany’s first pontiff in nearly 500 years has turned into a series of protests, awkward moments  and political scuffles. The pope ranks low in the opinion of most Germans, and the response to his visit underscores just how low.

Thousands turned out on Thursday for a protest march organized by the Lesbian and Gay Association of Brandenburg-Berlin.Jörg Steinert, manager of the LSVD, told a German newspaper that the 9,000 people representing the 68 organizations who participated in the protest “are demonstrating against the discrimination and persecution of homosexuals, against the unfair treatment of women, against the condom policy and other kinds of degradation due to the pope.”

Which just about sums up all of Church policy.

The awkward moments included the Pope meeting with Klaus Wowereit, who was just elected to his third term as Berlin’s mayor and who is openly gay. Wowereit, who may have aspirations to become the nation’s chancellor, expressed understanding of the protesters. Benedict also meet with German President Christian Wulff, a practicing Catholic who is divorced and remarried, a sin the Church considers only slightly less heinous than being gay.

The political scuffles surrounded the Pope’s address to the German parliament. Dozens of politicians boycotted the address to protest…well, see above. The Pope still has three more days to go before he returns to the relatively safe confines of the Vatican.