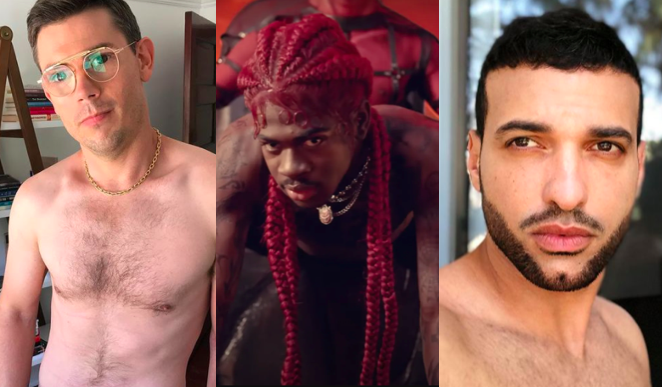 Fresh off the heels of his groundbreaking performance at the BET Awards last Sunday, rapper Lil Nas X responded to a follower on Twitter this week who asked whether he was a top or bottom. His answer? “Power bottom.”

He smartly followed that up with a quote from the poet Chimamanda Ngozi Adichie which he not so subtly altered, swapping the word “girls” for “bottoms”.

“We teach our bottoms to shrink themselves, to make themselves smaller. We say to bottoms, you can have ambition, but not too much. You should aim to be successful, but not too successful. Otherwise, you would threaten the top.”

We teach our bottoms to shrink themselves, to make themselves smaller. We say to bottoms, you can have ambition, but not too much. You should aim to be successful, but not too successful. Otherwise, you would threaten the top.

Whether Lil Nas X was giving a straightforward answer or once again being provocative is unclear, but we’re totally here for it regardless.

The 2021 Queerty50 honoree came out as both gay and “a total bottom” in a 2017 Facebook post. Looking back on it in 2020, he said, “Fans around the world have thanked me for the way I came out and said I made them feel powerful … That I came out and said, ‘I’m a total bottom,’ might turn off executives. I didn’t care. Coming out made me a better actor. And I don’t regret it. … I’m ready to break out and change the conversation and challenge the world that we live in.”

In 2015, Davey Wavey convinced a straight guy named Donald to record a video of himself bottoming for the first time. Armed with paper towels and lube, Donald was given a butt plug and put into a “butt booth.” Upon inserting the plug into his derriere, he made a sudden jolt of pleasure before saying: “You know, I would say it feels pretty good because I’m starting to get hard.” And just like that, a new bottom was born.

The gender fluid actor/poet revealed that, while they may present as a top, really they are vers, “depending on the day”. On their Instagram story last year, Tortorella shared an illustration that claimed to identify a person’s preferred sexual position based on how they sit. Though they were seated like a top, they clarified: “But more here. Depending on the day y’all,” with an arrow pointing to the “vers” image.

The experimental Los Angeles-based filmmaker released his short film about the woes of power bottoming back in April. Wracked with anxiety and insecurity, the film’s protagonist Frankie tries to accept himself as a hungry bottom. Of his film, Rios said: “It’s about the self-induced panic one experiences when they are put in an extremely vulnerable position. … The film wasn’t made for everyone, but it was designed to accommodate anyone who wanted to see it.” Stream it on Vimeo.

The pop darling was declared a “bottom icon” in 2018 when he released the single “Bloom”, which was basically an ode to taking it in the butt. Speaking to Them shortly after the song’s release, Sivan said, “Without getting into like any sort of details whatsoever, that was a song I wrote about a particular experience. I’m not branding that as myself forever.”

Subscribe to Queerty for a daily dose of #life #c.briansmith #daveywavey stories and more