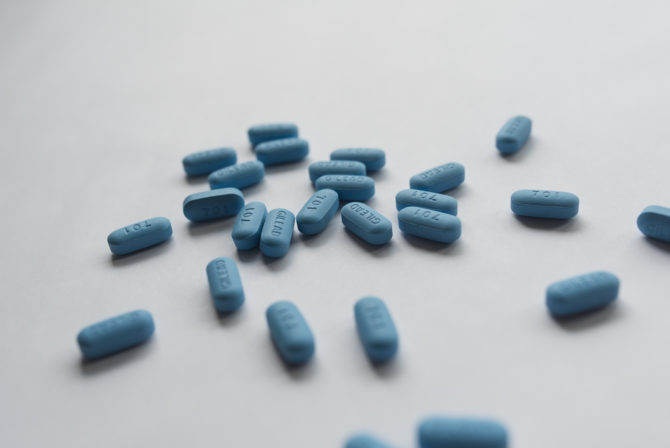 Zachary Zane has been on PrEP since 2014.

“I was liberally using my Grindr account,” he writes in a new think piece. “Yet when my (gay) therapist brought up PrEP, I shook my head. ‘“Do I really need that? I use condoms most of the time. I’m not sleeping with that many guys.'”

That’s when his therapist said, “If you got HIV when you had access to a prevention drug at nearly no cost, would you forgive yourself?”

After giving it some more thought, Zachary decided to heed his therapist’s advice.

“I went to my doctor’s office, got tested, had my liver function checked, and started popping that blue pill daily. I still take it religiously and I consider myself lucky.”

Related: This daring PrEP video puts the sexy back in HIV prevention

As it turns out, Zachary’s reservations about taking PrEP are not uncommon. He points to a two studies published earlier this year by AIDS and Behavior.

The first study looked at how queer men and transgender women viewed PrEP, and how those views affected their likelihood of taking the drug. Around 41% said they believed anyone who takes PrEP is “a slut.” (Two participants already on the drug said they don’t tell people for fear of being labeled promiscuous.) Another 41% reported that they believed people who take PrEP are actually HIV-positive but are lying about their statuses.

The second study found similar results. Respondents reported beliefs that people on PrEP were promiscuous, and 42% of them said they believed a popular conspiracy theory about the drug that claims those in power (i.e. drug companies, lobbyists, etc.) are somehow manipulating access to PrEP for some sort of personal benefit or financial gain.

Meanwhile, a recent look into how teenagers view HIV and PrEP by Jezebel sheds light on whether the stigmas Zachary reports on are lessening in younger generations. (Spoiler alert: They’re not. At least, not yet.)

19-year-old Kaleb Anderson, was diagnosed with HIV last year, says he and his friends never trusted PrEP from the time they first learned about it.

“We all thought it was a joke,” he explains. “We didn’t think this little pill could actually do something. Before being diagnosed, I never considered taking PrEP and I knew exactly what it was.”

After testing positive for HIV, Kaleb says he now recommends PrEP to all his friends.

“If I would have been taking PrEP, would that have made a difference in how I am now?” he wonders.

Josh Bruce, director of education at the Birmingham AIDS Outreach, tells Jezebel that teaching youth about HIV prevention is still a major challenge.

“We have huge problems with stigma here,” he explains. “We are in the Bible Belt. HIV to them means, gay gay gay dirty dirty dirty bad bad bad. Some of the more affluent schools, those are where we get the kickback of, ‘Oh that’s not a problem here.’”

And 24-year-old HIV/AIDS activist and educator Deontez Wimbley from Atlanta says education is still a huge hurdle there as well.

“There’s so much I have to untangle and weed through and disprove and demystify, to where after I’ve done that to educate in a way that is constructive, half of the time is gone,” he says. “I have to disprove certain ideas about condoms, I have to disprove that you have to be Magic Johnson to get medication. The willingness to learn is not an issue, the issue is [youth] have already learned so much and so much of it is incorrect.”

Stigma surrounding PrEP is alive and well, even in younger groups of LGBTQ people, and it’s fed by misinformation, judgment, and fear. Until people can over those things, little will change.

“The folks who have the highest risk of acquiring HIV are the ones most likely prevented from taking PrEP by beliefs about what using the HIV prevention drug might say about them,” Zachary writes.

It’s time, he says, for us to stop letting stigma interfere with out healthcare and our lives.