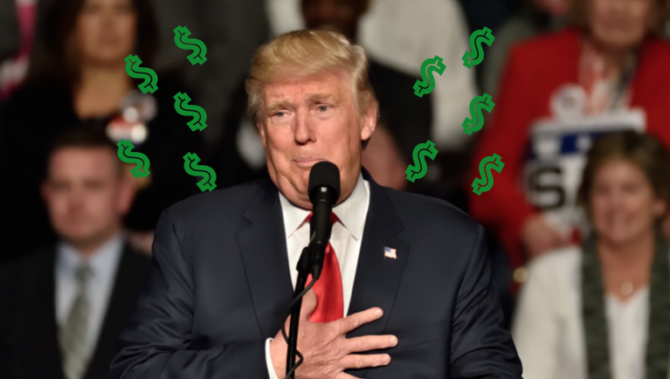 It’s well-known that President Trump and his family are racking up quite the federally-funded tab a mere three months into his administration, but now it’s been reported that the U.S. Secret Service is requesting an extra $60 million for next year to account for “the unusually complicated lifestyle of the Trump family.”

So what does an extra $60 mill get you in this day and age? Well roughly half of the additional money — $26.8 million — will go towards securing Melania and Barron in their glass tower in Midtown Manhattan.

More specifically, the Melania/Barron fund will go towards “residence security operations at the president’s private residence in Trump Tower,” with $12.5 set aside to pay for “personnel related costs in New York.”

That’s to say nothing of the additional millions spent by the city of New York at the cost of taxpayers.

Another $33 million will be used for extra travel costs for “the president, vice president and other visiting heads of state.”

Since taking office, Trump has spent most of his weekends at Mar-a-Lago ($$$), and his sons have been traveling the world promoting Trump properties with full Secret Service details ($$$).

“There’s no time for vacation. We’re not going to be big on vacations,” then-candidate Trump said at a campaign rally last year, criticizing President Obama’s travel schedule. “The White House is this incredible place. It represents so much, and you’re there for a limited period of time. If you’re at the White House and you have so much work to do, why do you fly? Why do you leave so much?”

A source who has knowledge of internal Secret Service budget planning told the Washington Post that the request for funds was actually rejected by the White House Office of Management and Budget.

So what does that mean for all of us? Well, the Secret Service will instead likely chip money away from other programs to accommodate the bloated costs. That means taking money from investigating things like cybercrime, missing and exploited children, and counterfeit-money — all operations under the purview of the Secret Service.

Meanwhile, President Trump has proposed a massive federal budget cut that even conservatives are calling “draconian.”

And here’s the real kicker — a portion of that extra $60 million will go directly into the pockets of none other than Donald Trump himself.

Take Trump Tower in Manhattan, home to Melania and Barron: To provide adequate protection to the first family, Secret Service must rent out significant space in the building.

Their landlord, of course, is the president.