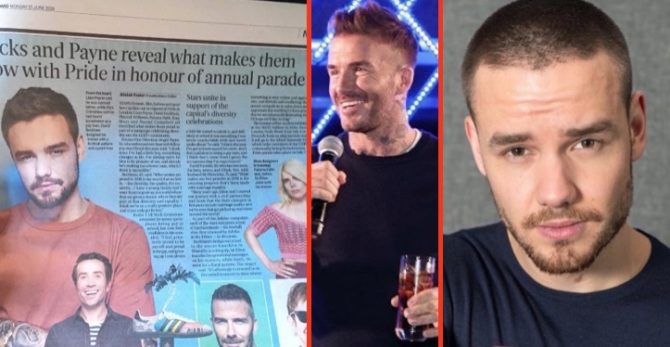 Pride season has so much mainstream momentum these days that the root message of queer liberation can easily drift away like a rainbow-shaped ballon untethered from its parade float.

British newspaper the London Evening Standard is learning that lesson the hard way after a Pride feature hit newsstands to a less-than-stellar reception from many readers.

In the piece, titled “Becks and Payne reveal what makes them glow with Pride in honour of annual parade”, the voices of straight stars are featured more prominently than those of the LGBTQ interviewees.

The next paragraph quotes Payne; the third, Beckham.

Payne’s quote, a perfectly lovely sentiment, has virtually nothing to do with the struggle for LGBTQ folks to gain a footing in the world.

“I think since I’ve had a little boy,” he said, “everything changes in life. I’m aiming more for him to be prouder of me, and already he’s making me a better man, which I think is incredible.”

Only then does the piece mention LGBTQ participants, out radio personality Nick Grimshaw and Elton John among them.

GayStarNews shared some of the criticism the piece has received.

One reader, Chris Mandle, tweeted a photo of the newspaper with the word “really.”

He wrote: “Worth pointing out this campaign is raising money for the Albert Kennedy Trust, which is a brilliant cause helping tackle LGBTQ+ homelessness. But come onnnnnnn. The quotes alone tell you Liam Payne has nothing significant to say about the LGBTQ community.”

Worth pointing out this campaign is raising money for the Albert Kennedy Trust, which is a brilliant cause helping tackle LGBTQ+ homelessness. But come onnnnnnn. The quotes alone tell you Liam Payne has nothing significant to say about the LGBTQ community.

Another commenter, Twitter user Jurrasic JP, added: “I’m all for allies vocalising their support but understand what you’re supporting. It’s not about making your children proud of you. It’s about rights you will never understand. It’s about equality you have. Check your privilege @LiamPayne and please do some research on #Pride.”