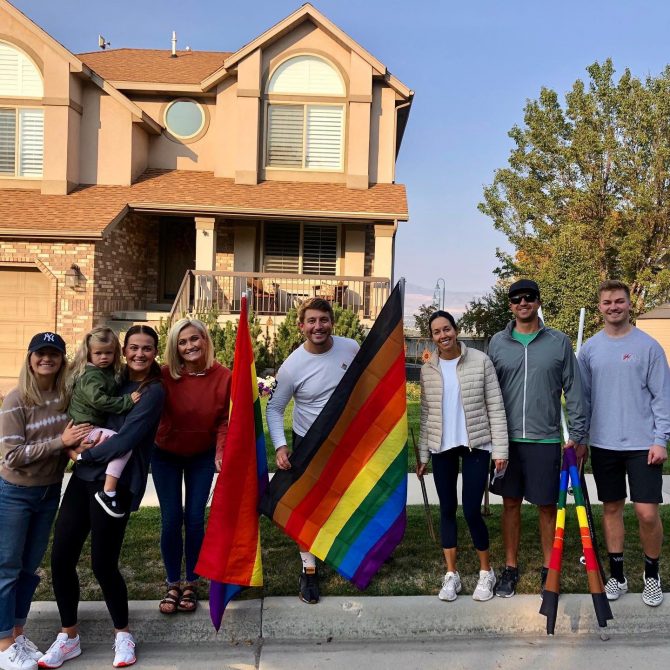 Residents of the Autumn Ridge neighborhood of Sandy, Utah pushed back against an anonymous letter that attacked residents for flying the Pride flag.

Resident Andy Phillips took to Twitter to vent his frustrations after his family–along with several other families in their neighborhood–received anonymous letters attacking them for the display of the flag. Families in the area had chosen to display the rainbow flag in celebration of National Coming Out Day earlier this month. Residents Kristy and Willy Donahoos spearheaded the initiative, encouraging neighbors to display more than 80 flags.

Please read my mother's brilliant response to one of her neighbor’s "concerns" about flying the LGBQA+ flag in her neighborhood – The world needs more fearless leaders like my mother that understand the Good Word  @cynthiakimball5  #leadership #love pic.twitter.com/qUNPfTgBrn

Andy Phillips’ mother, Cynthia, received the letter, which Andy posted to Twitter. In part, it reads: “Is choosing to fly the colors of the LGBT community consistent with the covenants you made with God as a member of the Church of Jesus Christ of Latter-Day Saints? Have you considered the message that you are sending to your non-member neighbors? Will a casual observer know or appreciate that you are trying to draw attention to gay teen suicide? Can you love and support your neighbor and others without flying a flag that actively promotes a lifestyle that is our of alignment with God’s plan for the family? Are you aware of what the ‘Gay Pride’ flag stands for? Are their values, your values? If you are unsure about any of these questions, please conduct a prayerful search to obtain your answers.”

Cynthia Phillips had originally thought every member of the neighborhood received the letter. She later learned that the anonymous author had delivered it only to members of the Mormon Church. “I wanted to set the record straight to my non-member neighbors and my Church member neighbors,” Phillips told KUTV.

Phillips, who hosts a podcast called Mormon Stories, offered a fierce rebuttal to the letter. “First,” Phillips began, “the Pride Flag is most generally understood to be a symbol of peace and inclusion – and a reminder of the LGBTQAI+ movements that seek to ensure equal rights and non-discrimination for these often marginalized groups of people. Additionally, the flag has come to be seen as a symbol of individuality and social equality.”

She goes on to outline tenets of the Mormon faith that encourage acceptance and love of people who are different and points out that the kind of condemnations listed in the anonymous letter are generally reserved for clergy within the church. She also ribs the writer of the letter for cowardice, in leaving their name(s) off the letter.

“Please note the observations I have made in this letter as your concerned neighbor to which I have put my name,” Phillips concludes, “and also these unequivocal public statements for which I wish to be remembered.”