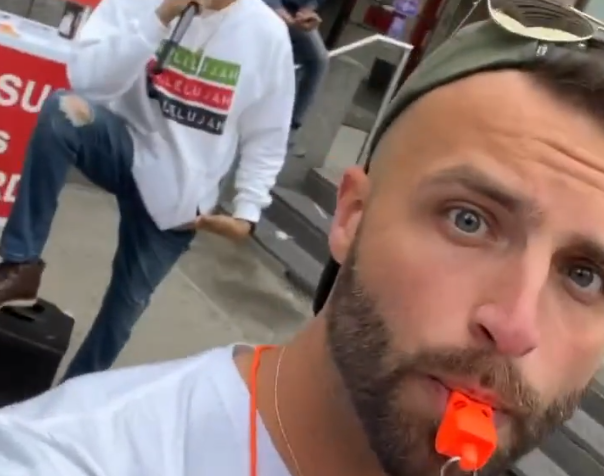 Anyone who’s attended a big Pride event is familiar with the pests that are homophobic protesters. They grab their little speakers and megaphones to go yell about hell or children or whatever at people who are just out trying to have a nice time.

This week, two men decided to handle a homophobic street preacher in a way that we can only hope becomes the blueprint for Prides to come.

Justin M. and Sebastien Dufour could hear this bigot spewing his hate all the way up in their living room on Sunday. When they heard he’d be back the next day, they “decided to get creative” with how to deal with him.

Related: This guy saw 7 antigay protesters outside a church, so he called a few friends for help

Sure enough the man was back on Monday, blaring things like “That guy supports child molesters!” at random passersby.

Justin and Sebastien went down to give the man a piece of their minds. “He gay bashed us for holding hands, and I initially reacted by getting in his face, and then I realized they were trying to provoke a response,” Justin M. said.

“So we went home and got a whistle and speaker to use a non-confrontational method to fight back and it worked great.”

Along with Sebastien’s fierce whistling over the man’s violent rhetoric, the pair apparently also blasted Gaga hits like “Rain On Me” and “Born This Way” to drown out his bull.

“I would like to see something done about people being able to set up speakers on corners and preach hateful rhetoric,” Justin told blogTO. “It was very directly attacking people walking by.”

“While we accept that their religious beliefs do not align with our values, that doesn’t give them the right to attack us.”

Justin went on to acknowledge the strength of their people in the area, saying, “Our community will always come together to drown out the hateful voices of the few.”