Weeks after he settled the civil sexual assault case with Virginia Giuffre, and reports he was to disappear from public life, Queen Elizabeth’s son, Andrew, the Duke of York was very visible at yesterday’s memorial service for his father, Prince Philip.

His participation has divided public opinion and left some wondering if he’s planning on more public appearances.

At the time of Prince Philip’s death a year ago, and because of Covid restrictions, the royal family was only able to hold a small funeral service with 30 guests. Yesterday, a much larger service was held at Westminster Abbey in London.

Although speakers paid tribute to the late Prince, observers were more interested in the state of the Queen’s health and the role played by her son, Andrew.

This was the 95-year-old monarch’s first public engagement this year, following poor health and mobility issues. The service was timed to run for only 45 minutes out of consideration for this.

It was known that Andrew planned to attend the event, but many were surprised that he played a more prominent role than the Queen’s other children.

In the fallout following his friendship with the late, convicted sex trafficker, Jeffrey Epstein, and the case with Giuffre, Andrew was stripped of his honorary military titles and other patronages, and barred from being called “His Royal Highness”.

Many wondered if he’d be sitting somewhere in the congregation. However, not only did he accompany his mother from Windsor Castle to the abbey in London, but he then walked her down the aisle to their front-row positions. It had previously been thought the Queen would be walked down the aisle by the Dean of Westminster.

Few commentators would begrudge Andrew, who has never been formally charged with wrongdoing and has always denied having sex with Giuffre when she was 17, from attending his own father’s memorial service. However, even the normally more pro-Royal UK press raised an eyebrow at Andrew’s active role. 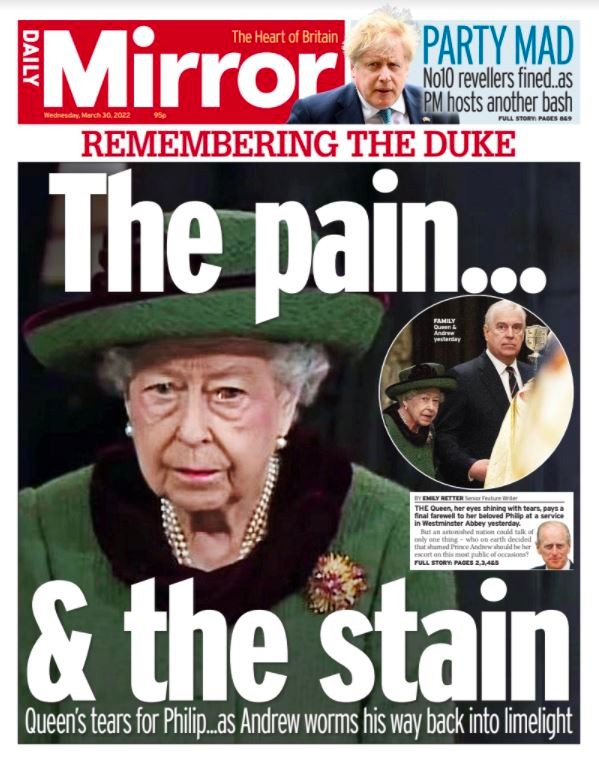 The Daily Mail says a source says Senior Royals “reluctantly agreed” Andrew accompanying the Queen to the church as they live close to one another. However, the source says they were “dismayed” at him walking her down the aisle.

The unnamed source said, “It would be a great shame if the service was overshadowed by all of this. There is a strong sense of regret that this has happened.”

Veteran Royal Correspondent Jennie Bond said in the Express it could only have been done with the Queen’s blessing.

“This was her way of quietly showing ‘OK, he messed up really badly, this was a disgrace, but he is my son’.”

Another royal correspondent, Peter Hunt said, “It didn’t happen by chance. He could have sat in the congregation with others, with his relatives, but they actively decided that he would have this role of supporting her … She’s very clearly stating that he has a role at family occasions.”

In the Independent, Sean O’Grady wrote that Andrew, “Somehow managed to steal the show, and in the worst possible way.”

“It’s another PR blunder, and a particularly ghastly one.”

“The service was one of those confused and confusing moments where the institution of the monarchy, its state role and its frankly political aspects collided with deeply personal aspects of family life.”

Lisa Bloom, a lawyer representing eight Epstein victims, was also critical of Andrew’s public role, contrasting it with his public promise to demonstrate regret over his involvement Epstein: “We are watching. We are waiting. As he resumes public appearances, it appears that, like his promise to cooperate with law enforcement, this will be yet another broken promise.”

Andrew’s former wife, Sarah Ferguson, did not attend the event. She famously had a frosty relationship with her late father-in-law for many years, although it’s thought it thawed somewhat before his death. Also not in attendance were Harry and Meghan, the Duke and Duchess of Sussex, who live in California.

After yesterday’s leading role at the memorial, some are left wondering if Andrew is on “mission creep”, back to a role in public life. Is he planning to attend any of the many public engagements being held this summer to mark Queen Elizabeth’s Platinum Jubilee?

Mark Borkowski, a PR and royal commentator, said it was possibly Andrew testing the waters for a mis-judged return: “Make no mistake, Andrew would be determined to come back into public life.”

On Twitter, many expressed shock at Andrew’s role yesterday. However, others pointed to the family nature of the event.

I see Prince Andrew is travelling with Her Majesty to Prince Philip’s memorial
I’m all for rehabilitation but it starts with facing justice, accepting responsibility & working to rebuild victims’ confidence
None of that is present here, so far pic.twitter.com/wOyyksDRl2

I can’t believe I’m about to defend anyone royal but to put this in context, an elderly lady travels to the memorial service of her late husband of many decades, with her favourite son. When the Queen dies it’s probably game over for all of them, let’s allow her this?

This was the Queen endorsing Andrew after he paid millions to a woman he says he has no recollection of ever meeting. Either Charles and William didn’t intervene – or they did and failed to stop the prince performing such a high profile role at his father’s memorial service. pic.twitter.com/yyMm8mIAjl

I thank God that my father is still alive. But when he dies, no matter what I’ve done wrong, I know that my entitlement to give my mother whatever support she needs will be greater than any strangers’ entitlement to cast judgement on how I do it.

Is there anyone in Britain who is not embarrassed ? https://t.co/LgLHq4XZAV

His presence was always going to be controversial, but Prince Andrew taking on the self-appointed role of consort for the day has completely overshadowed a beautiful service. And to think just a week ago palace sources were fretting about the optics of a *wheelchair*. pic.twitter.com/8qG70bO94M

‘Prince Andrew was given a seat in the front row just weeks after he paid millions to one of Epstein’s sex slaves.’

Please not everything is PR. It’s a memorial service for Prince Andrew’s father and his mother chose him to escort her during such a difficult time. Spin it anyway you want but he had every right to be there to celebrate his father’s life.

Allowing Prince Andrew to walk The Queen into Westminster Abbey was a terrible decision by Buckingham Palace. What does it say to victims of sexual assault? Terrible optics just days after a poorly organised tour

Some reporters are reporting that insiders tell them Prince Andrew pushed himself forward to support the Queen at the service of thanksgiving for Prince Philip. That is is not true. It was Her Majesty’s decision and he and the family bowed to her decision. He’s an easy target.

There will be criticism of Queen for arriving with Prince Andrew but he is her son and they are honouring his father. They are a family not just a Royal family