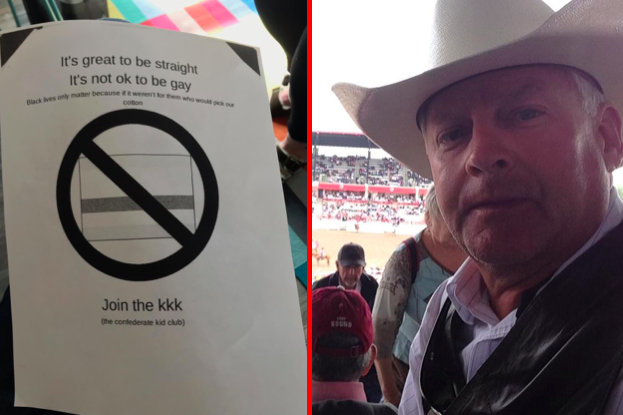 Racist and homophobic posters began circulating the halls of McCormick Junior High last week, and instead of doing anything about it, the school’s principal, Jeff Conine, decided to fire the teacher who brought the issue to his attention.

The posters read: “It’s great to be straight. It’s not OK to be gay. Black lives matter only because if it weren’t for them who would pick our cotton. Join the KKK.” 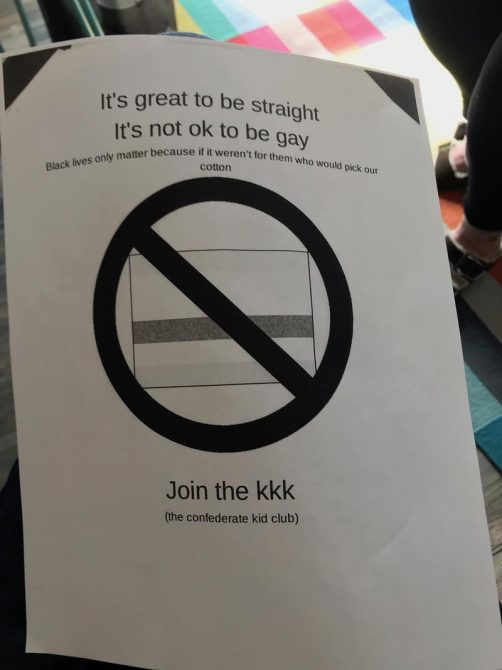 When substitute teacher and co-sponsor of the school’s gay-straight alliance Kaycee Cook saw the posters, she immediately reached out to Wyoming Equality, a non-profit organization that works to defend the rights of LGBTQ people in the Cowboy State.

Sara Burlingame, executive director for  Wyoming Equality, said the organization has received numerous other calls from parents and community members about the posters.

“This is unacceptable,” she says. “It does not reflect the values of Cheyenne. We’re not going tolerate this. And we’re going to show up and support our LGBT youth and our black youth with unwavering pride and support.”

The problem even got the attention of Cheyenne Mayor Marian Orr, who took to Twitter to respond to the situation.

Tonight, my heart is the heaviest it’s been since taking office. This is not right. To the youth in our community: You are loved. You are valued. We need you to take us forward. You are Cheyenne. https://t.co/NSvk0MRkKv

And here’s where the story takes an unfortunate turn.

Because days after Cook contacted Wyoming Equality, she was abruptly fired from her job.

Cook says she received an email last week from Conine informing her that she had been terminated from her position and was no longer welcome in the building.

“I am notifying you that due to incidents that have occurred at McCormick you are no longer welcome as a guest or a substitute teacher in our building,” the email read. 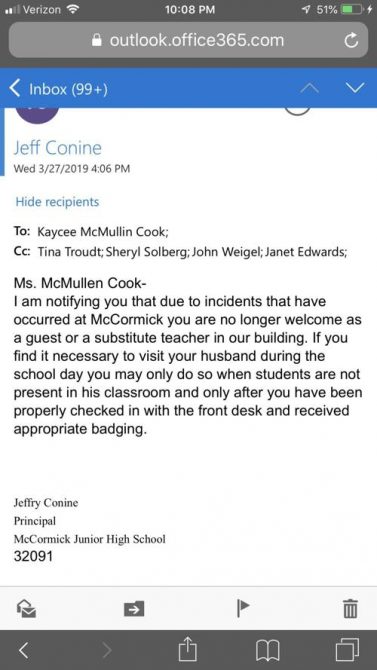 Cook tells Wyoming News that she believes Conine fired her in retaliation for being a whistleblower, even though she doesn’t believe she did anything wrong.

Meanwhile, school district officials say they are investigating the situation.

“In the midst of an investigation regarding inappropriate flyers that were posted at McCormick Junior High yesterday, (LCSD1) is offering support to our LGBTQ and black students who were reportedly targeted through the incident,” a statement from the Laramie County School District 1 reads.

But Burlingame doesn’t seem hopeful that the situation will be remedied anytime soon. How can it be, she wonders, without the school’s principal on board?

“Unfortunately, I don’t really feel the principal, Jeff Conine, shares that goal,” she says, adding that Conine’s firing of Cook makes it difficult to trust him.

Conine, who has worked at the school since 1986, has been approached by several media outlets for comment but so far is refusing to say anything about the matter.