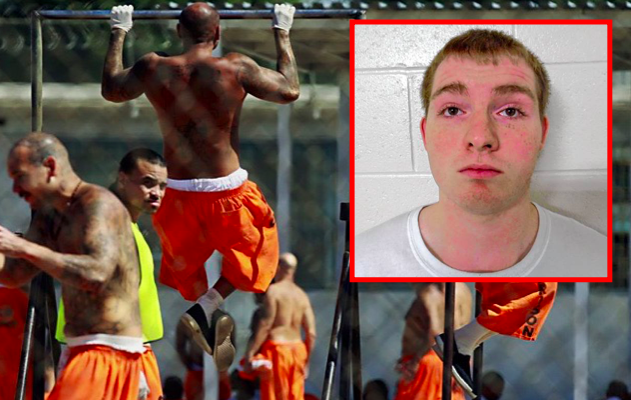 An ex-prison guard is denying charges that he sexually assaulted a male inmate at the Southern State Correctional Facility in Springfield, Vermont.

21-year-old Cameron Morin pleaded not guilty to felony charges of sexual assault-no consent, sexual exploitation of an inmate, and lewd and lascivious conduct this week in a Windsor County Superior criminal court.

According to Morin’s attorney, James Valente, a police affidavit filed against his client doesn’t actually say the inmate alleging the assault never consented.

“There is no description with respect to consent, indicating either a lack of consent or that there was no consent,” Valente said.

Valente also tried saying that the type of sexual contact Morin allegedly engaged in with the inmate isn’t listed in the definition of “sexual contact.”

“There’s no probable cause because sexual act is pretty narrowly defined,” Valente argued. “And that definition does not include contact between the hand and penis.”

Meanwhile, prosector Heidi Remick disagreed with Valente on the facts, pointing the part of the affidavit that alleged Morin didn’t just touch the inmate’s penis with his hand, he also performed oral sex on him against his wishes.

“The complainant said that he went along with the defendant’s advances because he feared being placed into solitary confinement and also because defendant allegedly threatened complainant’s family,” Remick said.

Remick went on to explain that the inmate told detectives his cellmate pretended to be asleep while the assault happened, but was actually witness to the abuse. Afterwards, the cellmate, along with several other prisoners, began “blackmailing” Morin, demanding he smuggle cigarettes into the prison in exchange for their silence.

According to the Vermont State Police Bureau of Criminal Investigation, they received a tip in December 2018 about a complaint made against Morin to the Department of Corrections investigations hotline by an inmate at the facility.

When detectives approached him, he immediately slipped up by referring to the inmate by name, even though investigators never actually identified him.

Morin then admitted he had touched the inmate’s “private area” with his hand and “admitted to smuggling in cigarettes for inmates because he was being blackmailed.”

He was arrested at the prison on January 24 and placed on administrative leave the following day before resigning from his job later that week.

Speaking after this week’s court hearing, Valente said, “We just want to remind the public, who has already heard about charges that are fairly salacious, that Mr. Morin hasn’t been found guilty of anything.”

Asked whether his client was denying any sexual contact happened between himself and the inmate, Valente simply said, “No comment.”

If convicted, Morin could face life in prison.