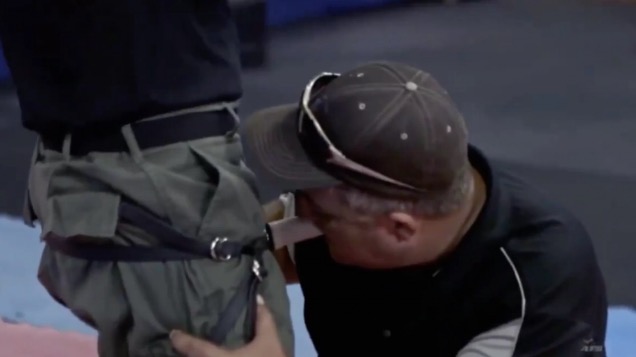 If you haven’t been watching Sasha Baron Cohen’s Who is America? on Showtime, you’ve been missing some of the most uncomfortable moments to grace the small screen since the 2009 VMAs.

Roberts believed he was filming a segment for Israeli television with anti-terror expert Erran Morad, who was, in fact, a character created by Cohen.

“Morad” led Roberts through some role-playing exercises to combat terrorists that included one baffling segment with a sex toy. Roberts fully embraced the challenge, biting down on Cohen’s strap-on for an incredibly long time.

In an interview with the New York Times, Roberts says he had no idea anything was amiss until the segment aired over the weekend. That says a lot about his judgment right there.

He reveals that even now looking back, the whole sex toy portion “made sense.”

“You have one chance to do something, or you’re certain you’re going to die. That’s the scenario they’ve laid out,” Roberts says. “I don’t know many people, if they were completely honest, that they would say they wouldn’t take that opportunity to maybe, hopefully, grab one thing to maybe save their lives.”

And by “grab the one thing”, Roberts means chomping his jaw down on a phallus and using it as a negotiating tactic.

“My mouth is big enough for two of these!” he managed to growl during the segment, sex toy firmly planted in cheek.

Now he says he’s “exploring what legal remedies may be available” to someone who’s made a complete fool of themselves on television.

Good luck with that one.

Who is America? airs Sunday nights at 10 p.m. on Showtime.