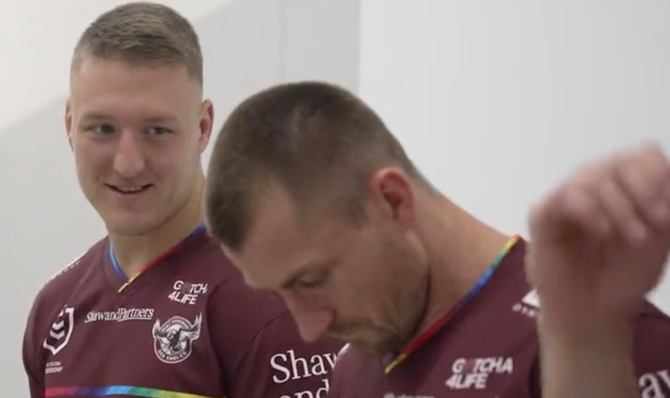 An Australian rugby coach has apologized to the homophobic players on his roster after a team Pride promo didn’t go as planned.

Coach Des Hasler arranged for his Manly Warringah Sea Eagles to don uniforms featuring rainbow accents for a game on Thursday. Fun, right? Except that seven players have said will not be wearing the gear, or playing in the game, citing religious and cultural objections.

They’re especially upset that the team wasn’t consulted ahead of time, but whatever point they may have on that issue is difficult to empathize with.

Related: You must see this highly unusual Pride display at an Oregon soccer game

Our thoughts and prayers go out to these seven players who’ve no doubt suffered quite the ordeal. But perhaps the apology should actually go to LGBTQ athletes and fans who for too long have been fearful of expressing themselves because of, well, exactly this kind of nonsense.

Coach Hasler didn’t quite address that group directly, but he did explain why he initially decided to run with the promo.

“The intent of the rainbow application of our jersey was to represent diversity and inclusion for all, utilizing the symbolic colors of Pride to embrace all groups who feel marginalized, face discrimination, and a suppressed share of voice,” he said during a press conference. Unfortunately, those intentions were not realized.

Hasler added: “Sadly, the execution of what was intended to be an extremely important initiative was poor.”

Former Manly player (and current actor) Ian Roberts, who became the first pro rugby league player to come out as gay in 1995, called the fumble “sad and uncomfortable.”

“I can promise you every young kid on the northern beaches [of Sydney] who is dealing with their sexuality would have heard about this,” he told the Sydney Morning Herald.

He shared a message for the seven players in a separate column for the paper. “Can you not understand the pain visited upon gay people who, no matter what they do, are disrespected simply for being gay?” he wrote.

Here’s a look at the jerseys the rest of the team will play in this week:

Attitudes towards LGBTQ inclusion have come a long way in sports, with more and more athletes coming out or showing true allyship in recent years.

Sadly, this will certainly not help the situation.