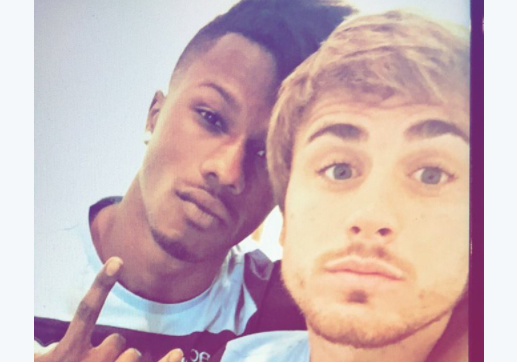 Pro soccer players Keita Balde and Patricio Gabarrón Gil (a.k.a. Patric) both play for the Italian soccer club Lazio. On Sunday, they had everyone talking when they posted this photo their social media pages:

As you can see, the photo shows the guys in their swim trunks holding hands by the poolside. It left many people wondering if perhaps they are couple… or maybe they’re playing a joke… or maybe it’s just some good, old-fashioned bromance?

“If Keita is gay then fair play for coming out,” one person wrote. “Very bold. Sets a good message for other homosexual players that it’s okay to come out.”

“Wow very brave of you guys, could be a watershed moment for gay men in the sport,” another person said. “Much respect.”

“Massive statement, one in this day and age shouldn’t be necessary,” a third person wrote. “But fair play for being honest. Best of luck to ye. Sign for Liverpool.”

Here’s another photo of them posted on social media last month:

The red heart and the two male emojis — one black and one white — could suggest that they are a gay or bisexual couple, but neither followed up with any detail or responded to comments on the post. I tweeted some questions to both that have so far gone unanswered.

Then this morning, the guys took things a step further when they shared another picture, this one explaining that they aren’t just a couple, they’re a throuple with some dude named Sadok Moumni Chamlali:

Hmmm. We’re not quite sure what to make of all this, but we’ll definitely keep you abreast with any developments.