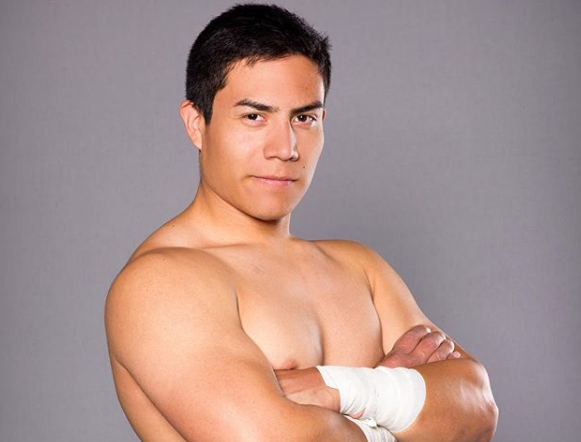 Bio: Mexican-American wrestler Atlas grew up watching pro wrestling with his folks. He spent his childhood in Mexico before coming to Los Angeles as a teen. Both his mom and his dad loved Lucha Libre wrestling–yes, the style of Mexican wrestling that involves wearing the drag of flamboyant masks and uniforms–and took Jake to see numerous matches as a kid.

As he got older, Atlas found himself drawn to cheerleading and gymnastics, though wrestling remained his first love. When he turned 18, he decided to go pro. He trained a full two years before entering his first match.

Tonight, it’s out with the old & in with the new.

Coming Out: In high school, Atlas came out to his family, and it did not go well. Today, his mother and brother still have trouble accepting his sexuality despite his success. Nevertheless, Atlas began to understand the power of living his truth right after high school, even snagged a few dates while training. In 2017, he nabbed the prestigious Southern California Rookie of the Year Award. With his star on the rise, Atlas felt he needed to take a stand.

Making a Difference: Atlas’ coming out surprised the sports world. To date, he remains one of the few pro wrestlers to ever do so. In a subsequent interview, he also spoke of his battle with clinical depression. Atlas revealed that he’d attempted suicide in 2015 during a particularly down period, struggling with his mother rejection and that he’s fought a life-long battle with anxiety as well.

He opened up about his depression for the same reason he opened up about his sexuality: to make a difference. “I am proud to fulfill my promise of coming out publicly,” he said in a statement, “about my sexuality to be a voice for those that struggle with this issue like I have for many, many years; to be a voice that reminds everyone in the same shoes that there is nothing you cannot achieve.”

I’m proud to be the first openly gay Southern California Rookie of the Year. pic.twitter.com/1kLBhFbRjq

Coming out is a force for positive change because of the influence it leaves on the LGBTQ community that experiences hardship, confusion, and backlash for expressing their identity. My reasoning in doing so was to leave a lasting impact on young LGBTQ athletes who may still believe they cannot experience happiness not success in industries that don’t showcase diversity and inclusion. I hope to bring change and awareness that individuality and authenticity are crucial to personal and societal development.